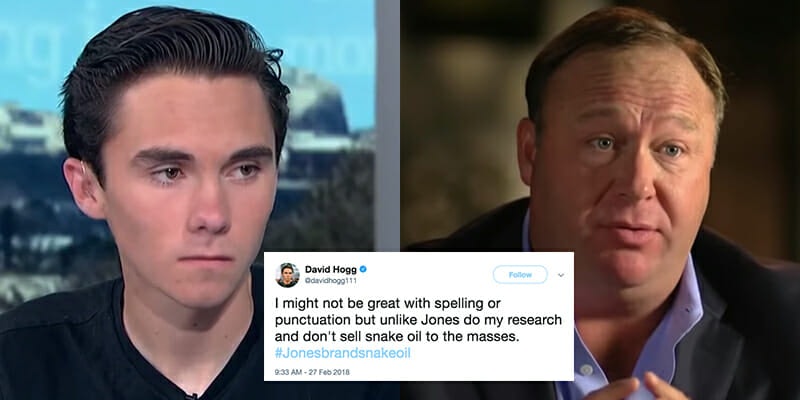 The conspiracy theorist wants to 'set the record straight.'

With only one strike left before his right-wing channel is permanently banned from YouTube, Alex Jones scrambled Tuesday to get in the good graces of 18-year-old Parkland shooting survivor David Hogg.

A Twitter exchange between the InfoWars host and student activist ended when Hogg declined an invitation from Jones for an on-air debate.

In the wake of the shooting that killed 17 people at his school, Hogg has been one of the most outspoken Florida students in the youth-led movement calling for gun control. Most recently, Hogg encouraged spring breakers to boycott the state Florida. His activism has made him a target for right-wing conspiracists who have also accused him of being an FBI plant and a 26-year-old felon (both accusations are false).

But Hogg hasn’t stood down, and on Tuesday the teen put Jones on blast for spreading conspiracies.

Hey Alex Jones you seem to be really confused as to what I do/who I am I'd love to come on and clear some of this up because clearly as a shit journalist you can't clearly.

I might not be great with spelling or punctuation but unlike Jones do my research and don't sell snake oil to the masses. #Jonesbrandsnakeoil

When your snake oil only makes you THICC 45 days later #jonesbrandsnakeoil pic.twitter.com/UoM9Gi2zUT

Jones, who also once said the 2012 mass shooting at Sandy Hook never happened, responded by imploring Hogg to “stop the defamation” and come on his show to “clear up some of the disinformation.”

Jones also posted a video asking if Hogg was just trying to “bait” him into being rude—and to bait the teen into agreeing to a debate on Jones’ show.

Hogg declined the invitation, saying he would “not speak to anyone that has had disgusting remarks to victims of mass shootings in the past.” Ditching his ingratiating tone, Jones responded that Hogg was “bullying and viciously attacking” him.

With the fate of his YouTube channel hinging on a single strike, it seems Jones will have to find another way to “set the record straight.”