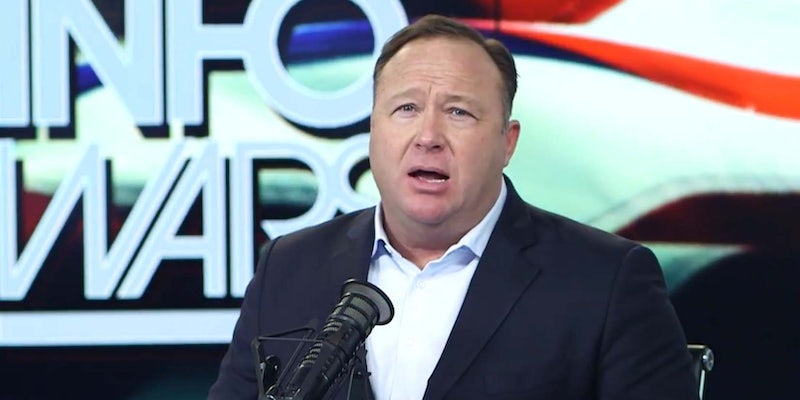 The employees filed complaints with the Equal Employment Opportunity Commission.

Former employees of the conspiracy theory peddling website InfoWars have accused its founder and host Alex Jones of committing sexual harassment and making anti-Semitic comments, according to a report.

Beckford says that Jones groped her during a meeting with other high-level InfoWars staffers while pretending to offer sympathy to her after an on-camera appearance.  In the document, Beckford says Jones went in for a “side hug” and reached down and grabbed her butt and told others in the room: “Who wouldn’t want to have a black wife?”

“I felt embarrassed and nervous, but I knew that he had specifically touched my behind at that moment as a sly come-on that other people may not notice,” she wrote in the documents, which were published by the Daily Mail.

Jacobson said InfoWars staffers referred to him as “the Resident Jew” and “the Jewish individual” while working for InfoWars for 13 years.

Jacobson also said Jones was ‘grooming him for homosexual sex.’ in the EEOC report. “

Jones denied the allegations, telling the Daily Mail they were “completely, totally false.”

“I’m not going to talk about former employees, I mean nobody accuses me of stuff like that,” he told the news outlet. “No, no and in fact I’m not the type of person to say those kinds of things. So that’s why my feelings are hurt. Wow. That’s all I can say. That’s total bullshit.”

InfoWars has been criticized for spreading false information and pushing unsubstantiated conspiracy theories. The company’s YouTube channel is close to being shuttered after receiving two “strikes” for posting conspiratorial videos in the wake of the school shooting at Marjory Stoneman Douglas High School.

You can read all of the Daily Mail‘s story here.