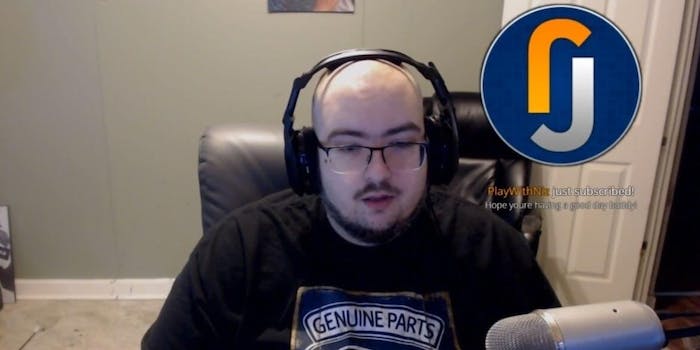 Twitch streamer Wings of Redemption was a big-time content creator on YouTube in the early part of the last decade. He uploaded videos of himself playing Call of Duty that generated millions of views. And while Wings of Redemption, aka Jordie Jordan, still has 423,000 YouTube subscribers, he hasn’t uploaded in about two years. These days, he spends much of his time gaming on Twitch.

But according to the streamer, his viewers don’t appreciate him enough. That’s why he wants more and more donations to continue gaming on his broadcast.

Last week, Jordan, who has 160,000 Twitch followers, told his followers that they needed to donate $10 per hour to him or he’d stop playing Modern Warfare on his stream.

“I hate to be like this, but if you want this stream to continue, it’s going to be $10 an hour,” he said. “We need to make $10 in donations per hour for this shit to continue or I’m just going to get off. This is cancer. This is not fun at all.”

He was also clearly frustrated with whomever he was gaming at the time.

“Why do people always want to fuck with me to this level?” he said. “These people are stopping me from trying to earn a living at this point. It’s not fun when you’ve got six motherfuckers on the enemy team throwing smoke grenades and you’ve got four guys on your team going 0-15.”

On Wednesday, though, Jordan realized he should be asking for more. Reading from his chat, he said somebody asked if him if $10 was still the going rate for an hour of streaming.

“Again, if you want an actual going rate, it’s like $25,” Jordan said. “I was being nice with the $10 an hour. I don’t want to enforce that shit, but what’s usually going to happen is I’m going to start running ads.”

A few weeks ago, prominent streamer BadBunny ranted at her viewers for not subscribing to her Twitch channel, thus denying her the ability to earn $5 per month from each user. She got roasted for calling her viewers “cheap ass” and for saying they were “leeching” off others. Now, Jordan is taking a more aggressive approach.

But it sounds like a few of his fans are fed up. As one Twitter user wrote, “You turned from what was once a great call of duty content creator into something that everybody now makes fun of simply because of your attitude and how you treat your viewers and long time fans.”