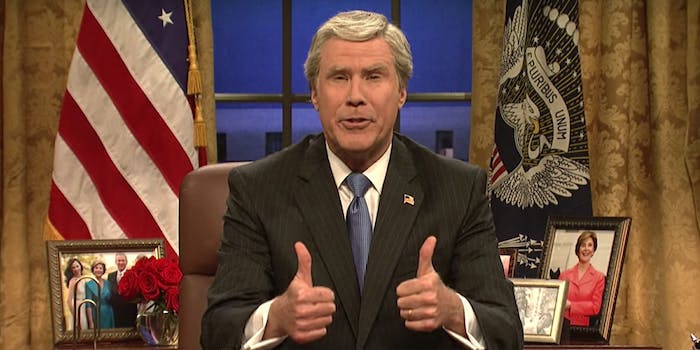 Will Ferrell returns to ‘SNL’ as George W. Bush in hilarious sketch

Will Ferrell revived his role as Bush in a hilarious cold open on Saturday Night Live, and he came with a few reminders. First and foremost, he warned Americans to stop romanticizing the Bush presidency in light of Donald Trump’s.

“I just wanted to address my fellow Americans tonight and remind you guys that I was really bad,” said Ferrell as Bush. “Like, historically not good.”

After reminding people of some of the bad things that happened during Bush’s time in the Oval Office (“Hey, what has two thumbs and created ISIS? This guy.”), Ferrell was joined by SNL cast member Leslie Jones, who took on the role of former Secretary of State Condoleezza Rice. The two broke into a song to the tune of the opening theme from the sitcom All in the Family about the good ol’ days of the Bush years with lines like “The housing market went to hell / Nazis kept it to themselves.”