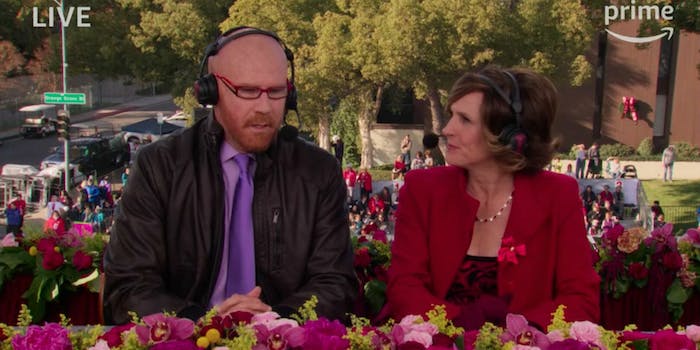 The event is being produced by Funny or Die for Amazon Prime.

The Rose Parade has been an American tradition since 1890, but if you think they’re all the same, you need to tune in right now to Amazon Prime.

Former Saturday Night Live co-stars Will Ferrell and Molly Shannon are providing running commentary of the event under the alias of Cord Hosenbeck and Tish Cattigan, respectively. It’s a Funny or Die production, and while there’s obviously some structure to their bits, it mostly off the cuff and off color. The two are clearly in their element, riffing off each and bantering even when they think they’re supposed to be off camera. It captures the absurdity of the event, and the internet is loving it.

The clips will surely be going viral on YouTube soon, but Reddit is collecting some of its favorite one-liners from the parade thus far.

“Is there a greater love than a man or a woman’s love than with an animal?”

“They are raising the roof, and it is being raised.”

“If the Georgia marching band were to play the Oklahoma football team in the Rose Bowl, they would beat their ass.”

“Are these edible flowers, Robert.”

It’s not too late to catch the tail end of the parade on Amazon Prime, but if you’re just now hearing about it, fear not: A replay will be available immediately after it ends.