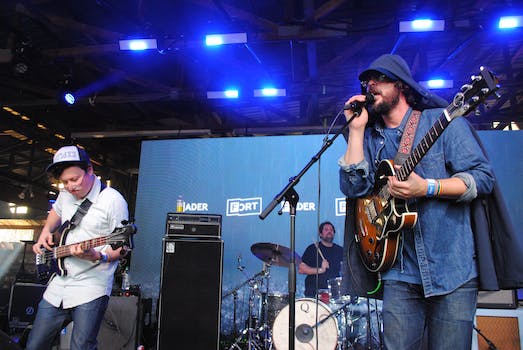 A groovy weather initiative might change the way we view those dreary, rainy days.

White Denim and the North Face teamed up to create a track with wind-triggered activation that will only play on Spotify when it’s raining. The song was released this week, and the Austin, Texas-based band played the tune live for the first time in front of a crowd of South By Southwest enthusiasts at the Fader Fort. Artists Cardi B, Madame Ghandi, and a surprise DJ set from Rae Sremmurd rounded up the afternoon.

Only available in the U.S.,“No Nee Ta Slode Ahn” unlocks in listeners’ geographical location during downpours, disappearing once the sun comes out.

The Daily Dot sat down with singer and guitarist James Petralli in the Dream Hotels artist lounge to talk about the inspiration behind the song, and the song’s poetic roots. (Longfellow is one of his favorites.)

“I tried to think about the best nature writers around, I went to some classics and tried to get some inspiration from there,” Petralli told the Daily Dot. “I ended up being more influenced by the haikus, so it’s more bang-on, it is what it is, and there’s no big metaphor.”

The weather-sensitive track is the first of its kind, and is expected to be available no matter the forecast in a few weeks.

“We are pretty meat and potatoes when it comes to how our music comes out, we’re pretty old school,” said Petralli. “So this story, or hook, that is a prevailing way of getting music these days is something we never do.”

In February Spotify teamed up with Accuweather to gauge how their users listen to music when it’s raining. Called Climatune, the music streaming service noticed that people listened to happier music when it is a nice day out, and more mellow tunes when it’s the opposite. The project also lets users see their city’s data, and listen to the most popular songs users listen to in different weather conditions.

White Denim, currently working on a new record, has been playing showcases for South By Southwest for nearly 10 years. The four-piece rock band is beloved locally for their fusing of blues, soul, psychedelic, and experimental rock notes.

The track is a part of a Spotify initiative with the North Face’s “Seek No Shelter” campaign to lift people’s spirits up when the sky decides to pour in their respective city. Along with White Denim’s song, the winter gear retailer also launched a new rain jacket.

“We wanted to change the perception of rain and the dynamics of it,” Kevin Hogan, senior brand manager at the North Face, told the Daily Dot. “Rain felt like a really cool device, especially during this time in the states.”

On Thursday White Denim performed an electric and energizing showcase, highlighting 2016 album Stiff that oozes with bright ’60s garage rock. The band ended with the new track, and Petralli sporting a rain jacket and “Explore” hat while the LED screen in the back showed rain.

If you aren’t convinced that maybe a little rain isn’t a bad thing, the North Face also created an extensive playlist to wake you up.