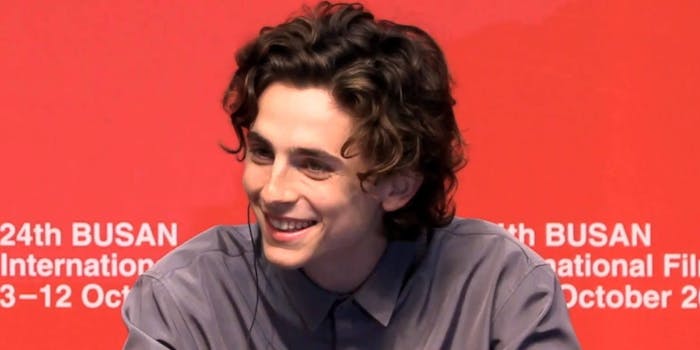 Cult indie director Wes Anderson is back with a new movie featuring a characteristically star-studded cast, including Tilda Swinton, Bill Murray, Owen Wilson, Kate Winslet, and Timothée Chalamet. Titled The French Dispatch of the Liberty, Kansas Evening Sun (aka The French Dispatch), it’s based around an American magazine in a fictional, 20th-century French city.

Searchlight Pictures just announced the film will come out on July 24, 2020, and while we don’t have a trailer yet, people are already excited. Partly because it’s been six years since Wes Anderson’s last live-action movie, and partly because, well, Timothée Chalamet. His fandom is not to be underestimated, and his 2020 schedule, which also includes the Dune remake, promises to make him an even bigger star.

Chalamet stans are already speculating that he’s the reason for The French Dispatch‘s R-rating for graphic nudity, which is a bit of a stretch because there are like 15 other male characters in the cast. (For the uninitiated, “graphic nudity” usually translates to “visible penis,” because the MPAA has pretty sexist standards for what is and isn’t appropriate for kids.) It’s unclear where Chalamet’s role stands in an ensemble story with dozens of well-known actors, but whatever: He’s in there somewhere!

Described as “a love letter to journalists,” The French Dispatch is based on an original concept by Wes Anderson. Some early reports suggested it might have musical elements, but that hasn’t actually been confirmed. All we know for now is its extensive cast list, the fact that it takes place in 20th-century France, and the near-certainty that it’ll resemble Anderson’s typically quirky style of storytelling.