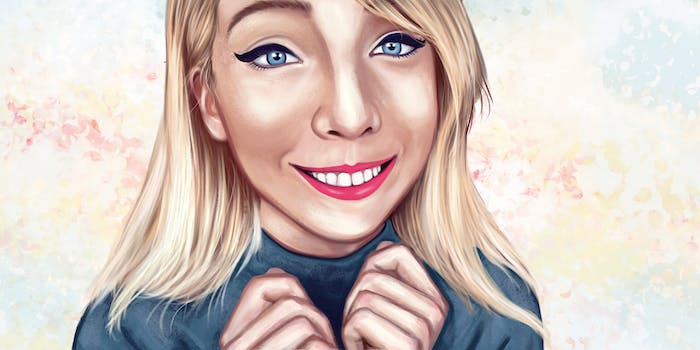 How #WCW Jamie Jo made a life on YouTube

The space where art, fandom, romance, and activism collide.

It makes sense why Jamie Jo is obsessed with Disney. With the voice of Cinderella and the painting skills of Rapunzel, Jamie has become YouTube’s resident art expert and nerd culture ambassador. Though it isn’t just her mesmerizing painting timelapses that gained her over 300,000 subscribers, but her vlogs. It’s her personality, presented in posts documenting the evolution of her life from filming in her Missouri bedroom to her whirlwind romance and marriage to fellow YouTuber Tom Burns.

Jamie originally started as a fan of YouTube before making the decision to open her own channel in 2011. In the beginning, her videos were mostly timelapses of her art projects and included little talking—a conscious decision influenced by her anxiety to speak aloud. It was her mind-blowing portraits of fellow YouTube creators such as Carrie Hope Fletcher, Kick the PJ, and Amazing Phil that originally made her channel go viral over four years ago. Today her work continues to mesmerize viewers as she makes stained glass windows of Belle and crafts Captain Hook’s ship, all via effortless detailing. But the thread that connects all of her projects is Jamie’s absolute love for everything Disney, gaming, and animation. It’s the type of enthusiasm that makes you enthusiast about all the things she’s talking about.

Over the years, Jamie’s channel has not only become an archive of her artistic talent, but a timeline of her relationship with Tom. The pair first met while Jamie was visiting London and became engaged at Disney World in 2015. From watching Jamie react to receiving her U.K. visa to seeing the pair’s first house, fans have witnessed the many milestones, both big and small, of the couple’s relationship. In turn, viewers have become part of their journey.

As a longtime fan of Jamie’s channel, what stands out to me most is Jamie’s personal evolution. When Jamie first released her video “Why My Voice is ‘Weird’” in 2015, she talked about the difficulty she faces speaking with her fans and the effect of abusive comments. Yet, over the past two years, Jamie has refused to stay silent about many issues that plague not only her but many creators. Last year, she released a sarcastic video titled “Becoming a Mom Vlogger” in which she talked about the pressure her former manager put on her to start making videos that gained more views.

This year, after ranking on YouTube’s trending tab for her 300,000-subscriber celebration video, Jamie took to Twitter and YouTube to share how her trending experience had been incredibly negative due to the sudden influx of trolls visiting to her channel. Her refusal to stay silent about issues plaguing the creator community is not only inspiring, but keeps writers, creators, and fans honest about what needs to be done to maintain a safe online ecosystem.

Whether you’re here for the art or to fall in love with the modern and fast-moving life Jamie has created for herself, this young artist is making YouTube a more joyful space. That’s always worth watching.