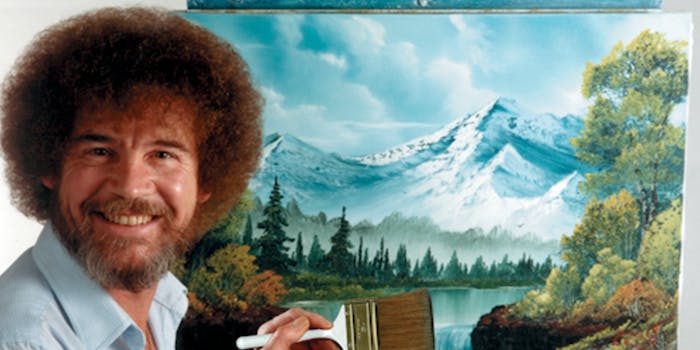 How to watch ‘Bob Ross: The Joy of Painting’ online

Learn how to paint 'happy little accidents' with the chillest guy ever.

Who would have known you could build a household brand with nothing more than painting, happy little trees, and the coolest ‘fro since Jimmy Hendricks? While working as a bartender, Bob Ross taught himself to paint watching television painter Bill Alexander on his show The Magic of Oil Painting. After a move to Muncie, Indiana and one massive perm later, Ross shot his first episode of The Joy of Painting from the local PBS affiliate. What followed was more than a decade of beautifully painted nature scenes from one of the most positive dudes on PBS (And that’s a station that Mr. Rogers called home).

In its 11 year run, The Joy of Painting enjoyed 31 seasons and over 400 episodes where Ross painted everything from forests, to meadows; desserts to oceans, and even the occasional Kinkade mountainside cottage. Each episode Ross starts on a fresh canvas, and before the episode ends, a gorgeous painting is produced. Better yet, Ross teaches you serious painting technique and encourages you to make the occasional mistake and relish the simple joy of creating masterpieces with a brush. It’s about as relaxing and chill as a show gets.

Here’s everything you need to know to watch The Joy of Painting online for free.

How did Bob Ross die?

Bob Ross was diagnosed with lymphoma in 1994, which forced him to retire from his popular painting program. He passed away on May 17, 1995, at age 52.

What channel was Bob Ross: The Joy of Painting on?

How to watch Bob Ross: The Joy of Painting

If you’re using Amazon Prime for free two-day shipping, you also gain access to Prime Video. Access to Amazon’s massive video library requires a subscription to Amazon Prime, which is $12.99 per month. Not only will you gain access to 2-day shipping, but it’s the only place online to watch most of the Bob Ross: The Joy of Painting series. Seasons 10-31 are available on the Amazon Prime Video library. Some streaming services only offer a week free. Amazon Prime is free for an entire month before you decide to commit to a full-blown subscription.

Where to watch Bob Ross: The Joy of Painting episodes

While Amazon is the place where you can get the most Bob Ross: The Joy of Painting episodes, there are a few other places you may be able to get your fix of positive painting.

Netflix is the king of online streaming, or at least, it’s the most ubiquitous one. You can’t stream the entire series, but Netflix has two Bob Ross collections including Bob Ross: Beauty is Everywhere and Chill with Bob Ross. Each collection has 26 episodes.