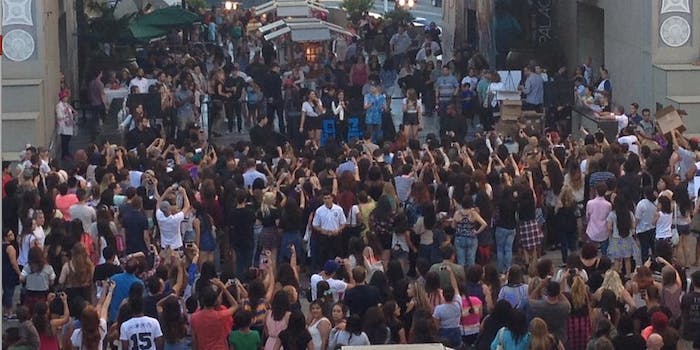 What it’s really like to attend a YouTuber meet-up

Screaming fans, selfies, and a lot of confused pedestrians.

YouTuber meet-ups have shut down places like Taco Bells and caused traffic jams in multiple cities, but some fans are just hoping for some one-on-one. Los Angeles-area fans got that opportunity Saturday when YouTubers Ricky Dillon, Jenn McAllister, Andrea Russett, and Rebecca Black descended on the Hollywood and Highland Center for a controlled yet chaotic VMA-sponsored meet-up.

The MTV affiliation gave it a more corporate feel than the spontaneous feeling of a single creator simply tweeting his or her location to their legion of fans. But the YouTubers still used the same tactics they would for any other guerrilla meet-up. Black and the other YouTubers announced the event one day in advance on their Twitter feeds, with support from the MTV VMAs channel, which also encouraged their 11.2 million fans to meet at the Hollywood and Highland Center.

GUESS WHAT! I’m having a meet up with some friends at the Hollywood & Highland Center tomorrow night. BE THERE AT 6:30pm! Come say hi :)

Many fans who weren’t in the L.A. area responded sadly about their inability to attend, and others questioned logistics like how early to arrive. This reporter decided to aim for 45 minutes early, assuming a large enough crowd would have amassed by then. While there were teens in the area with telltale T-shirts proclaiming their affiliation to specific YouTubers, they weren’t congregating in advance anywhere visible, although there was a stage and crew milling about. The, 10 minutes before the start, a line of teens began filling in. They had been forced to queue elsewhere out of the way of shoppers, and now the earliest arrivals were getting prime front-row positions.

“I’m excited about everyone, but I love Ricky,” Kimberly, a 12-year-old who was attending her first-ever meet-up and had arrived at 2pm for the chance to see her favorite stars, told the Daily Dot. “I’m hoping I can get a selfie with them.”

Dillon, Black, Russett, and McAllister walked out on stage to screams, quickly said hello and then promised to meet as many fans as possible, cueing the DJ and beginning to snap selfies and sign autographs with the fans closes to the stage. While security tried to hold fans back to leave a pathway for pedestrians, unaware shoppers began to stop in that area, and the fans swarmed forward to get a closer view, closing off the pathway. Security continued to run around, telling people they had to keep moving if they weren’t in the designated standing zones, and confused shoppers and tourists wondered who these famous people were who could cause such a riot. One 5-year-old boy began yelling “I’m a YouTuber!” to his parents’ amusement when they found out the stars in question were digital video producers and not TV or film actors.

At least one girl was pulled from the crowd suffering a panic attack, and ended up behind the stage area, fanned by her mother. After less than 20 minutes of signing, the YouTubers disappeared backstage, the DJ continued on, and suddenly a flash mob appeared, dancing to Fifth Harmony’s latest single. The X Factor-created group was the surprise of the day, running on stage to dance to their hit as the screams ratcheted up a notch. The YouTubers soon joined them, pulling some fans on stage to award the lucky group with free VMA tickets for the following night.

MTV packaged the event as a “VMA meet-up,” but fans there had little to no understanding that the event was in any way related to the MTV award show. While fans said they were excited to see musicians like Fifth Harmony, they had attended the event solely to see their favorite YouTube stars. Regardless of who they came to see, in less than an hour, the whole affair was over. The YouTubers and the pop stars disappeared off stage, and security began urging fans to leave. A quartet of teenagers who were too far back from the stage to get a picture or anything signed deemed the affair still worthwhile, and discussed their next moves in a chorus of undiscernable speech. After all the excitement they’d probably go get some food.

“And if we hear a crowd, we’ll go running,” they exclaimed.