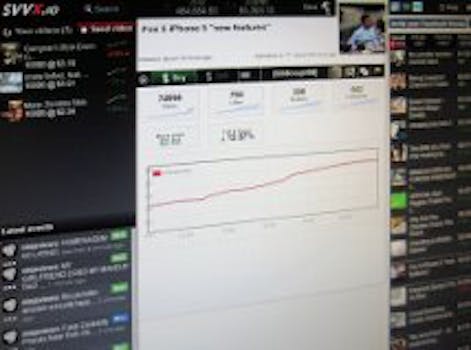 On Viral Video eXchange, see if you can tell what's going to make it big on YouTube next week.

If you’re one of those people who always manages to discover videos before they go viral, try sharpening your predictive skills at the Viral Video eXchange, described as “a stock market for viral videos.” Except the stock market costs money, whereas VVX.IO is free.

The game is the creation of Dave Ganly, a 31-year-old Irishman who settled in London four years ago. “I wanted to make a throwback to web based games like the BBC’s Celebdaq, which I played in college,” he said in an email interview with the Dot. “I love viral video as well, and was annoyed at the poor quality of discovery of really original viral content (as opposed to just ‘what had a million views yesterday’).”

Essentially, the game is like the stock market, only instead of betting real money on the future value of stocks, you bet free virtual currency (called “voins”) on the future viral success of a video (with no risk of bankruptcy, should you bet wrong, as the game doesn’t sell virtual currency, avatars, or special in-game powers for real money). Unlike the stock market, where huge wealth imbalances are inherent to the system, Ganly limits the number of voins you can “earn” on VVX.IO:

“The game has two major ‘goals’ from a player perspective – one is to finish an in-game story that reveals itself as players become more wealthy … and the other is to hit the overall target of one million voins. Like lots of games of this type, having seriously rich users (e.g. people on one million + voins) would cause too much imbalance, so players are awarded a final in-game achievement and reset to one thousand voins.”

Ganly called it “gratifying” to see how many players chose to continue playing even after being demoted from virtual millionaire status. “Traditionally, social/web games can expect to ‘keep’ a user active for up to two months – the Viral Video eXchange has players playing for over four months and still going strong, having reached the one million voin reset point numerous times.”

But an Internet game designed to predict which Internet videos go viral might suffer a Schrodinger’s cat type of paradox: The mere act of observing something affects what’s observed. Might this be happening with the Viral Video eXchange?

If Ganly rolled his eyes at the question, he was too polite to say so. “It’s a game first and foremost – players play because it’s fun and by playing they’ll find the newest best viral videos on the internet,” he said. Thus far, the site has about 1,600 members, 200 of whom visit at least once per week, 100 every day, and some “super-active” members who leave the site open on their mobile phones all day, making virtual trades as they go.

“The game’s algorithm ensures that ‘popular’ videos (like ones from Justin Bieber’s channel) don’t trade well,” Ganly said. “[T]he game is about true viral videos, not stuff that’s just going to get a million hits because it’s from Bieber, or Ray William Johnson, or Epic Meal Time. (Though those guys are awesome.) The paradox aspect is very far away – remember that YouTube is serving millions of videos at any time – even with thousands of active users (we’re not there yet) it would still be a drop in the ocean compared to YouTube’s phenomenally large user base.”

Ganly soft-launched the current version of VVX.IO last May. An early version released in November 2011 “proved the concept was fun,” he said, but it didn’t work too well, not least because his friends found it far too easy to game the system. So he released an alpha version early in February and spent the next couple months fine-tuning his algorithms and other matters before the current version’s soft-launch in May 2012. Since then, he’s been adding features and altering the algorithms to the program.

“It’s early days yet, and the game certainly needs more players, so I’d encourage everyone to give it a try.”