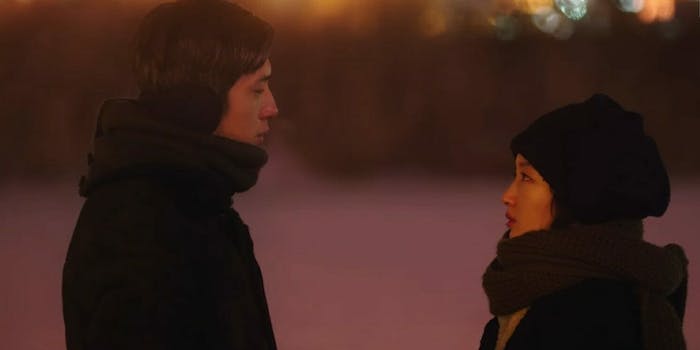 ‘Us and Them’ is a bittersweet romantic drama, done right

The film was a box-office smash in China, and it's now on Netflix.

Us and Them is a movie about finding the words you should have said to someone years ago. Like assuring a worried parent that you may be lost now, but you’ll be fine. Or letting a star-crossed love know what they really meant to you. It’s also about allowing yourself to be vulnerable enough to understand your regrets. The film is so in tune with its characters’ emotions that it runs the risk of being maudlin. But director and co-writer Rene Liu strikes the right balance of melancholy and sincerity.

Us and Them tells the story of the relationship between Jianping (Jing Boran) and Xiaoxiao (Zhou Dongyu). It was a box-office smash in China before Netflix acquired the rights.

The narrative is split into two timelines. In one it’s 2018 and the two reconnect during a delayed flight and they spend the night doing a post-mortem on their relationship. The other timeline tells their story from the beginning. We watch their chance meeting on a train in 2007 turn into a friendship, then a start-and-stop relationship that eventually fizzles out. But Us and Them is much more than a recounting of a will-they/won’t-they relationship that landed on “won’t.” It’s clear how Jianping and Xiaoxiao feel about each other, and their inability to translate that into a successful relationship is a brutal throughline. But the larger theme is that you can’t force someone into somebody they aren’t ready to be—the great irony of maturity is that it’s built on your missteps.

While the movie is primarily focused on Jianping and Xiaoxiao, it makes enough room to include other perspectives. Jianping’s father (Tian Zhuanghuang) is the most prominent supporting character in the story. His presence is marked by his worries about Jianping’s future, but he also has room for Xiaoxiao. Not in the sense of a parent showing interest in a potential in-law, but rather as a person looking out for someone. The best scene in the film is between him and Xiaoxiao. It’s a testament to Liu’s skill as a filmmaker. She’s a generous storyteller, unafraid to let her characters make mistakes but never vilifying them. That touch of humanity is such an easy thing to botch and she nails it in a way uncommon for most first-time filmmakers.

You’ll want to watch through the credits. Liu adds a crucial scene for Jianping. She also adds a series of shots of real people saying the things they’ve needed to say for a long time. By the time it’s over, you’ll want to hug someone.