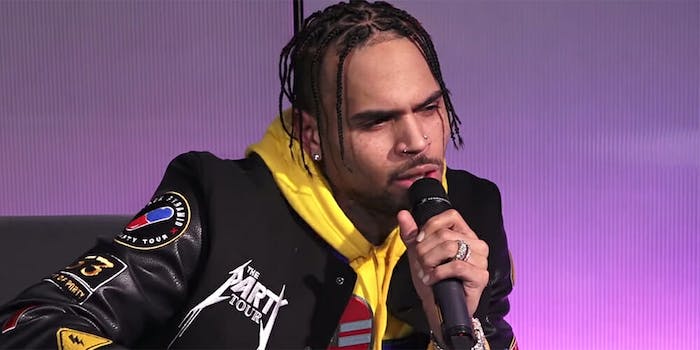 Following Spotify’s move to scrub R. Kelly from its official playlists, women’s rights organization UltraViolet is asking the streaming company to further remove other artists who are known or alleged abusers, including Chris Brown.

Last week, Spotify removed rapper XXXTencation and singer R. Kelly, who has for years been accused of sexual abuse and running a “sex cult,” from its editorial and algorithmic playlists. Spotify said in a statement that “when an artist or creator does something that is especially harmful or hateful, it may affect the ways we work with or support that artist or creator.”

UltraViolet’s executive director, Shaunna Thomas, thanked Spotify and lauded the initiative in a public letter, according to Complex.

“Your action demonstrates that Spotify is following the lead of Black women who demanded that these two men, who have sexually and physically abused women for years, not be promoted and celebrated,” Thomas wrote.

Thomas and her organization further asked Spotify to pull other artists from its playlists, listing artists known or suspected to be abusers including the Red Hot Chili Peppers, Nelly, Eminem, Don Henley, Steven Tyler, and 6ix9ine.

“Every time a famous individual continues to be glorified despite allegations of abuse, we wrongly perpetuate silence by showing survivors of sexual assault and domestic violence that there will be no consequences for abuse,” Thomas wrote. “That has a cultural effect far beyond one individual artist.”

She added that she made the letter public because she hopes platforms like iTunes, Google Play Music, and Pandora will follow Spotify’s lead.

After the streaming service removed R. Kelly from playlists, his team condemned the move in a statement to BuzzFeed News.

“Spotify has the right to promote whatever music it chooses, and in this case its actions are without merit. It is acting based on false and unproven allegations,” the statement said.