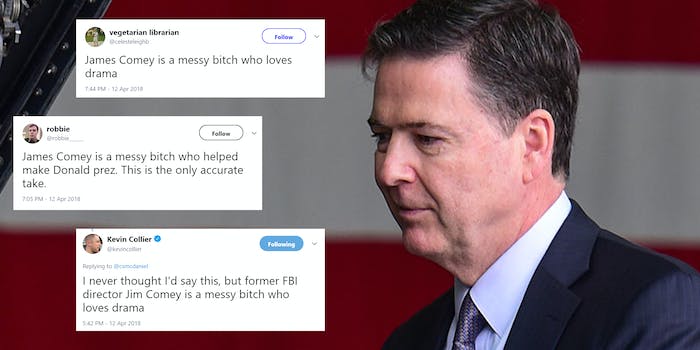 Comey lives for it.

Former FBI Director James Comey‘s Trump tell-all is set to drop next week, so snippets are starting to leak to drum up interest.

Not only are they juicy—saying he thought Hillary Clinton would win the election and revealing that Trump asked him to investigate the pee tape—they’ve cemented Comey’s status as a messy bitch who lives for drama. At least according to Twitter.

That is some messy bitch stuff.

The phrase—in case you didn’t know—originates from Joanne the Scammer and involves anyone who loves getting in other people’s shit and watching it play out.

It’s like someone who would get deep into salacious details, exposing a colleague or friend just to see how the rest of the world would react.

Comey is a messy bitch

Full disclosure: I absolutely will be getting Comey’s book, for no other reason than I’m a messy bitch who loves drama.

Lordy, Comey even included a bit about Trump’s hands in the book.

'His hands were smaller than mine': James Comey thought @RealDonaldTrump was shorter in person and not very strong https://t.co/dtKUSBEiPu

He dishes on Trump’s chief of staff.

But it isn’t just this tell all—his performance in front of Congress, his very obvious subtweets—Comey long ago cemented his status as messy bitch.

shaky logic here but love that Comey’s owning being a messy bitch who lives for drama https://t.co/FzguLn3Lw1

Amy Klobuchar during Senate hearing: "Mr Comey, gay twitter has called you, and I quote, 'a messy bitch who lives for drama.' Is that true?"

And to think, this messy bitch was in charge of the entire FBI. Now you start to see why he sent that last-minute Hillary letter.

And he sure knows how to rile up his haters.

James Comey is a proven LEAKER & LIAR. Virtually everyone in Washington thought he should be fired for the terrible job he did-until he was, in fact, fired. He leaked CLASSIFIED information, for which he should be prosecuted. He lied to Congress under OATH. He is a weak and…..

….untruthful slime ball who was, as time has proven, a terrible Director of the FBI. His handling of the Crooked Hillary Clinton case, and the events surrounding it, will go down as one of the worst “botch jobs” of history. It was my great honor to fire James Comey!