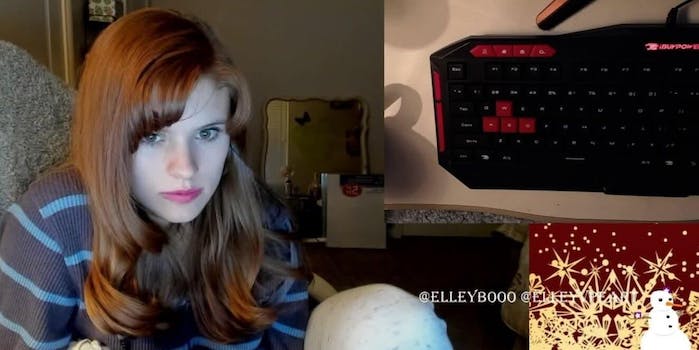 The viral moment sparked criticism from the community.

Twitch streamer Elleybooo apparently believed she had ended her live stream earlier this week when she described how she tried to “milk” her followers for donations. Ultimately, she failed to make any money, but she did manage to upset some in the Twitch community with her unintentional transparency.

After she thought her stream ended, Elleybooo, aka Elley Peart, made a phone call and began talking about her thoughts on her stream and her motivation. After a man picked up the phone, she said, “Hi babe, do you want to play [Call of Duty]?”

“That was a boring fucking stream,” she continued. “I was trying to milk it because I wanted a donation but whatever.” The man asked if she received any money, and a disheartened-looking Elleybooo said, “No … It was pretty boring.”

Though Elleybooo only has 256 followers on Twitch, where she wrote “you never have to [donate], but thank you from the bottom of my heart,” she is rather popular on Instagram with more than 65,000 followers.

“This is how every single one of these streamers feels about you filthy paypigs btw,” one redditor wrote. “Simp lords.”

Wrote another, “It’s not just the girls btw, almost every streamer tries to milk donos.”

That led to this response, “It’s almost as if it was their job. Wouldn’t you try to get as much money as you can from your job, wether (sic) you enjoy it or not?”

And another chimed in, “All streamers milk for donos. Most are just smart enough to turn the cam off before admitting it.”

For some streamers, donations are why they decided to turn their Twitch broadcasts into a full-time job. After receiving a $23,000 donation years ago, LegendaryLea told the Daily Dot that the donation was the impetus for her to forgo medical school and turn to full-time streaming for now. “I figured medical schools weren’t going to disappear anytime soon,” she said.

But as another person pointed out on Reddit, watching a Twitch stream is sort of like pro wrestling: You know it’s not real, but you temporarily push that out of your mind so you can enjoy watching the product.