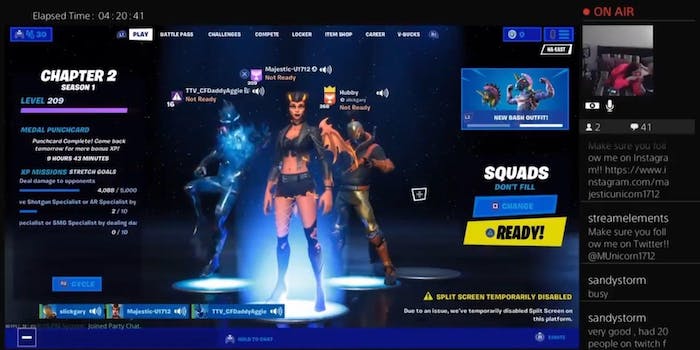 The internet is outraged.

A Twitch streamer has been banned after she appeared to bite and throw around her infant while she was playing Fortnite.

Now, the Twitch channel for TTV_MajesticUnicorn reads “Sorry. Unless you’ve got a time machine, that content is unavailable,” a telltale sign that she’s been punished by the platform. The stream was brought to light by Twitter user @vure89, who wrote Monday night, “Hey @Twitch @TwitchSupport i’m sure on-stream child abuse goes against your [Terms of Service], right? Never in my life have I seen a mother bite and throw their infant around, let alone because they were disturbing their 8 hour Fortnite marathon.”

The video shows TTV_MajesticUnicorn—who has less than 300 Twitch followers—appearing to grow annoyed with the toddler as they both sat on the bed while she played Fortnite. The streamer violently moved the child into and out of her grasp, and at one point, she appeared to bite him in the arm. She also appeared to push him onto the bed multiple times.

Beware: The video below is disturbing.

After she was called out on Twitter for being a “useless excuse for a mother” and someone saying “I hope you lose everything,” TTV_MajesticUnicorn replied in a now-deleted tweet that read, “Someone has too much time on their hands and goes around being rude to people that she doesn’t even know.”

On her Twitter page in recent months, she’s posted photos of a sleeping child on her lap while she games, writing “This is how you stream #parentstreamer,” and she posted other loving photos and videos of her husband and children.

According to @vure89, Child Protective Services and local police were informed of her most recent Twitch video.