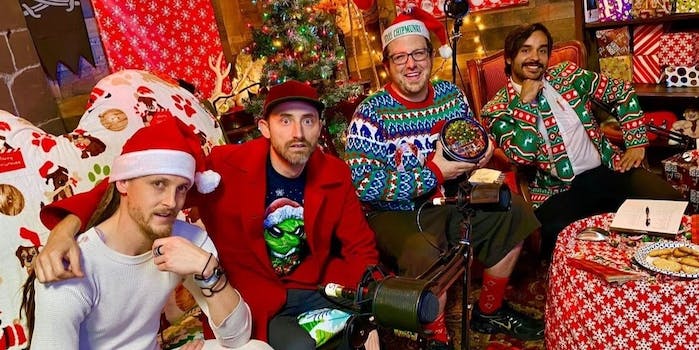 Twitch bans Mega64 after a streamer puked on a broadcast

The streamers behind the Mega64 podcast were banned from Twitch on Sunday night after one of the members puked on camera. The Twitch channel’s fans are unpleased with the news, and they’re questioning why Mega64 is being punished while Alinity Divine is still on the platform.

On Sunday, Mega64 streamed its 2019 ChristmasCast, which included an annual eating challenge.

And just like most years, it ended with somebody puking during the stream.

“It looks like ChristmasCast 2019 went too far and we were effectively removed from Twitch,” it wrote. “We are looking into this. Thanks to everyone for watching—we had a blast and a great 2019.”

It looks like ChristmasCast 2019 went too far and we were effectively removed from Twitch. We are looking into this. Thanks to everyone for watching- we had a blast and a great 2019.

Some fans expressed surprise that it took this long for Mega64 to face a ban for its yearly Christmas tradition, but others sought to include Twitch star Alinity Divine in the controversy. In what has become a topic of conversation seemingly every time a streamer gets banned by Twitch, a number of people wondered why one particular streamer gets banned while Alinity Divine almost never does.

Alinity, who has nearly 1 million Twitch followers, faced controversy recently when her dog sniffed her butt on a live stream and for hurling her cat over her shoulder onto the ground last July. She didn’t face punishment for either apparent Terms of Service violation, and it’s become a constant talking point for those who aren’t fans of her. Even when a controversy has nothing to do with Alinity, she invariably gets pulled into the discussion.

Wrote one person on Twitter, “So what I’m seeing trending on Twitch is a channel got banned for some vomit while doing an eating contest but Alinity still isn’t banned for throwing her cat AND having her dog sniff her crotch? Twitch really fucking up on this one.”

So what I'm seeing trending on Twitch is a channel got banned for some vomit while doing an eating contest but Alinity still isn't banned for throwing her cat AND having her dog sniff her crotch? Twitch really fucking up on this one. #unbanmega64

Many others weighed in.

And this is yet another reason why when I do get back into streaming I'm going to Mixer. I'm so over @Twitch's crap.

In the hours after Mega64 was punished, an #unbanmega64 hashtag was created on Twitter, and it began trending.

Last night I saw #UNBANMEGA64 at the top of the for you page and #13 in all of America.

This fan base rules. pic.twitter.com/o8xvjgxlMx

Hey @Twitch, If you could #unbanmega64 everyone will thank you, these guys have been doing hilarious stuff for years and there is way more explicit stuff on your platform. Not to mention they've also supported your platform for years as well.

hey @twitch if you're going to keep banning streamers for somewhat questionable reasons but then ignore big streamers who blatantly abuse TOS, Mixer will actually catch up eventually and people will leave #UNBANMEGA64

It’s unclear how long the Twitch ban will last. Twitch does not comment on individual accounts, and Mega64 did not immediately return a message to the Daily Dot.