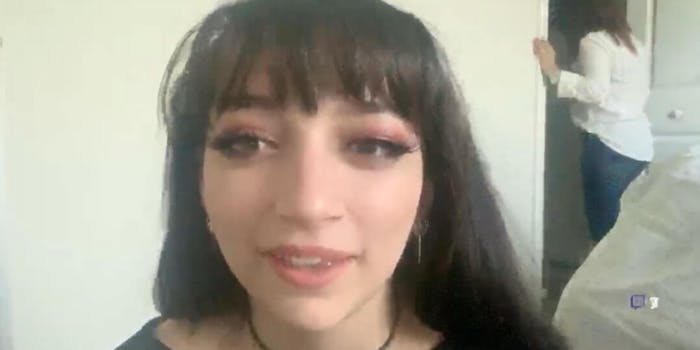 Twitch streamer goblincub lives at home with her family while she goes to college full time. She’s 18 years old, and as she writes on her channel bio, “streaming is still very new to me so thank you for being patient with me.”

Perhaps she should ask her mother to show the kind of mercy.

During a recent stream, goblincub—who says her real name is Mia—was discussing the lack of romantic partner in her life, and one of her fans noted that she was probably saving money by being single. She agreed with that notion.

But Mia’s mother, who was in the same room during the stream, had a slightly different idea.

“You save so much because you live with mommy,” Mia’s mother said. “That’s why.”

“I was talking to the chat, mom,” a seemingly horrified Mia said while nervously laughing.

“Mommy pays for everything,” Mommy said.

“You’re barely even doing that,” her mom said. “We’ll talk about that later. But you will, right baby? She will.”

“I will,” Mia softly confirmed.

“Or,” her mom continued, “rent’s going to be due on the first every month if you’re not.”

Earlier in the chat, one of Mia’s viewers said her mother was thick. “OK,” her mom said when told about the compliment. “Well, thank you.”

But don’t think that accolade softened up Mia’s mother for the rest of Mia’s stream. In fact, she’s made it quite that she’s ready for Mia to make a change in her life. Or at least start paying to live at home. Now, everybody on Twitch knows it too.