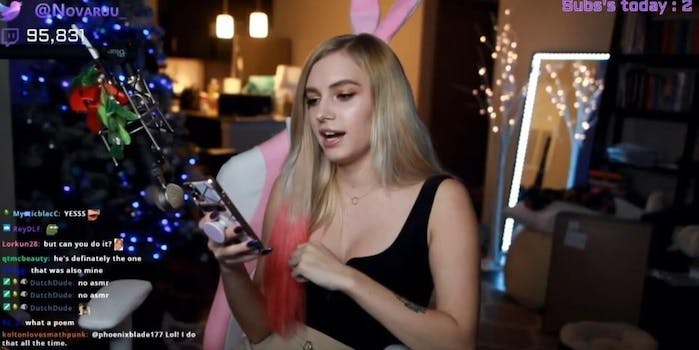 'How does raffling off a birdhouse and nudity have the same amount of day ban?'

Twitch streamer Novaruu has been banned from the platform for three days. She says she can’t believe her punishment is in the same category as getting nude on a stream.

The “Just Chatting” star, who has nearly 100,000 followers, revealed Tuesday night that she had been banned for “operating a contest or giveaway that violates Twitch terms of service.” Wrote Novaruu on Twitter, “Why did I just get a 3 day ban for raffling off hand painted bird houses? @Twitch @TwitchSupport I’m so confused.”

Why did I just get a 3 day ban for raffling off hand painted bird houses? @Twitch @TwitchSupport I’m so confused. pic.twitter.com/1iYKzRK0iW

As Novaruu noted on Twitter, section 9-3 on Twitch’s terms of service says streamers are not allowed to “make unsolicited offers, advertisements, proposals, or send junk mail or spam to users of the Twitch service, including, without limitation, unsolicited advertising, promotional materials … charity requests, petitions for signatures, or any of the preceding things related to promotional giveaways (such as raffles or contests).”

Novaruu responded by writing, “The most it says is promotional raffles aren’t allowed. I wasn’t promoting anything.”

She also wrote, “I wasn’t doing a giveaway[;] I was doing a raffle. People were donating $2 a ticket. I used to do these in school too. It wasn’t misleading in any way. I don’t understand why that would be [terms of service violation].”

Twitch does not comment about individual streamers and why they’ve been punished.

This isn’t the first time Novaruu has gotten into trouble for her streaming content.

In April, she gleefully streamed herself talking about smuggling drugs on interstate trips, saying, “I’ve smuggled weed into Arizona and back, I smuggled shrooms from New York to here, I’ve smuggled Xanax all the way from Mexico to L.A. I’d do it again, it’s fine.”

She told the Daily Dot she had been kidding. “On-stream I made a joke in poor taste,” she said at the time. “I played up how easy it might be to bring back OTC medication from Tijuana. I played it up for content and took the joke too far. The clip was then taken out of context and my wording isn’t the best.”

But Novaruu isn’t joking about the confusion she’s felt over her three-day punishment.

“How does raffling off a birdhouse and nudity have the same amount of day ban?” she asked. “At least give me a 1 day ban.”