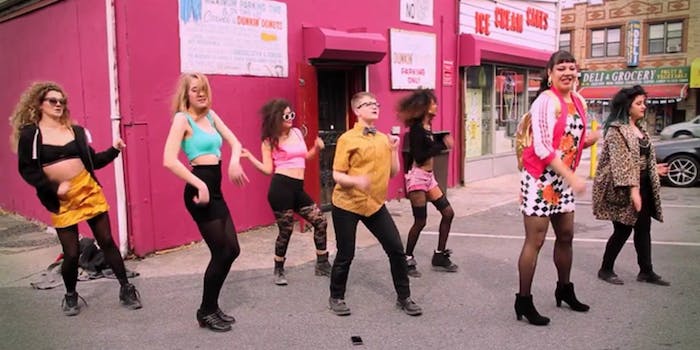 Hand Job Academy wants the ladies of Tumblr to clean up their act.

The content of the “Pop” video is safe for work, though there are several slow-motion shots of melting ice cream cones, knives, and women in animal masks eating containers of cheese balls. Towards the end of the song, Clara Bizna$$ puts a finer point on the issue: “Tumblr’s nasty, you know what I’m sayin’? All these little chicks, it’s like, respect yourself, lady.” (The “making of” video is pretty great too.)

“Pop,” which was released in June on Tommy Boy Records, is the follow-up to singles “Pussy Chicken” and “U Mad.” Earlier this summer, HJA used Kickstarter for its “Turn Up Scholarship,” which raised money for a video and an upcoming tour. However, the Kickstarter page mentions they were going to film a video for the song “Shark Week,” a “rap about periods.” Fingers crossed that still happens.