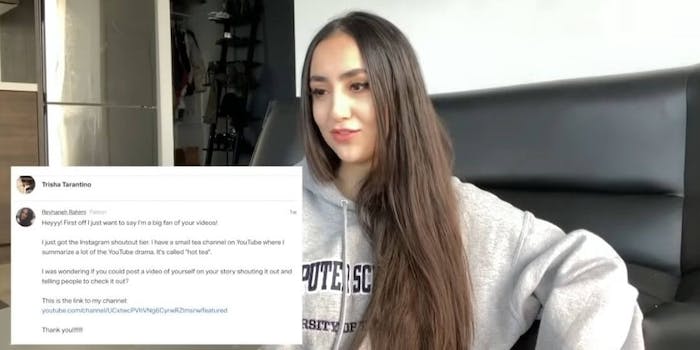 'I’m not going to lie. I’m kind of scared of Trisha at this point.'

Earlier this week, YouTuber Hot Tea uploaded a video to say she paid Trisha Paytas $500 to get an Instagram shoutout. Now, Hot Tea is worried that her YouTube channel might be deleted because she said Paytas keeps using the platform’s copyright strike system against her.

On Monday, Hot Tea—aka Rey Rahimi, who has about 65,000 YouTube followers—posted a vlog where she joined Paytas’ NSFW Patreon. There are plenty of paid tiers to view Paytas’ Patreon content, including $1 per month to listen to her thrice-weekly podcast; $100 per month for access to nude photos, nude videos, and her NSFW Snapchat account; and $1,000 per month for a custom-made video.

Rahimi chose the $500 option, which includes an Instagram shoutout. Although Rahimi said she’s a broke college student who’s $35,000 in debt, she said she paid Paytas so Rahimi could see her name in an Instagram story.

As Paytas writes on Patreon, the $500 tier “will get you 1 shoutout on MY ig story per every month you’re a member of this tier. you can pick the day or time …or I can post at peak/optimal posting times. you can submit any pic as long as its censored /appropriate for ig (so we both don’t get deleted).”

The problem, Rahimi said, was that Paytas—who has more than 6 million YouTube subscribers spread across two channels—never actually gave her that shoutout. So Rahimi posted a video about it.

A few days later, Rahimi returned to YouTube with a video titled, “trisha paytas hates me and now my channel might get deleted” where she accused Paytas of using YouTube’s copyright strike system to put Rahimi’s channel in jeopardy.

Rahimi said Paytas’ sister contacted her to issue her a Patreon refund, but then Rahimi realized that Paytas’ team had placed a copyright strike on one of Rahimi’s earlier videos. “It’s kind of petty and uncalled for, I’m not going to lie,” Rahimi said. “But also not really, because I kind of had it coming. I had a lot of videos on Trisha.”

Soon after, Paytas issued another copyright strike on a different video.

That’s what Rahimi is worried about. So, she said, she dug through all of her content and deleted all 30 videos she made that had content involving Paytas, including one that had 3.5 million views.

“I’m not going to lie,” Rahimi said. “I’m kind of scared of Trisha at this point.”

On Thursday, Rahimi said she received a third copyright strike, meaning her channel could be taken down (though as of Friday morning, it was still active).

Hey @trishapaytas let's talk about how you are abusing the copyright system and are trying to actively get this channel removed! pic.twitter.com/jU2oqnMf0j

Paytas has had plenty of other social media controversies lately. Last week, she denied exposing herself on TikTok, and in recent months, she’s been ripped for apparently ghosting a fellow YouTuber and for claiming she’s a trans man.

Paytas did not immediately respond to the Daily Dot’s request for comment.