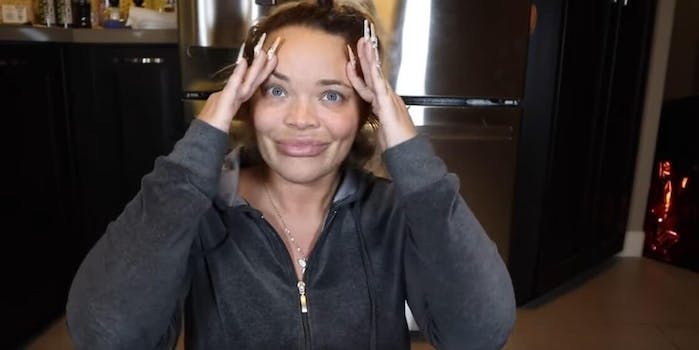 “Gabbie Hanna saying I’m blackmailing is HUGE DEFAMATION! 10000% hearing from my lawyers tomorrow—and I have NEVER EVER called my lawyers about another YouTuber,” Paytas tweeted on Monday.

Gabbie Hanna saying I'm blackmailing is HUGE DEFAMATION! 10000% hearing from my lawyers tomorrow – and I have NEVER EVER called my lawyers about another YouTuber

On Saturday, Paytas uploaded a video titled “WHY I DON’T TRUST GABBIE HANNA.” Paytas said they had briefly met twice before, but in the video, Paytas told a story about how Hanna had contacted Jason Nash when Paytas and he were dating. Paytas said, “She told him, ‘Be careful, Trisha has herpes. And you’re sleeping with her. Be careful.’”

An enraged Paytas then said, “’Gabbie, have we slept together? Have I showed you my STD results? Are you my doctor? Have you swabbed my vagina?’ … I don’t like people lying on me.”

Paytas, who said she admired Hanna’s music and videos, then said she had heard plenty of bad things about Hanna and that she couldn’t understand why Hanna was focused on her.

“I’m trying to stay out of drama,” said Paytas, who strongly denied she had herpes and who recently married a cardboard cutout of Brad Pitt and who recently claimed she was a transgender man.

In another video released on Monday, Paytas said Hanna had told people that Paytas was blackmailing their mutual friend Gabi DeMartino into defending her online. DeMartino had recently been dishonest when she told Hanna about a recent conversation DeMartino had with Paytas where they discussed Hanna. (Yes, this YouTube back-and-forth is somewhat confusing.)

“This is very bizarre,” Paytas said. “This is so, so stupid in the grand scheme of things. … This literally feels like contrived Mean Girls.”

Much of Paytas’ 41-minute video from Monday is mind-spinning, as she reads screenshots and text messages from either Gabi DeMartino or Gabbie Hanna about who dislikes who, who’s talking trash about who, and who’s telling each other what other people are saying.

But Paytas is clear about whether she ever blackmailed DeMartino, tweeting that: “Petty drama bullshit aside. You say I’m blackmailing someone is a HUGE accusation. … Once my lawyers get involved tomorrow, I can no longer talk about this. This is a very sketchy situation. Where people involved have texted me admitting to me they lied multiple multiple times … Gabbie Hanna is scary and lying on others. Lie to yourself fine, but accusing me of blackmail is a HUGE line u crossed. She was copied on the email to my lawyers. She can have hers reach back out. She is so so scary.”

As Distractify points out, Hanna tweeted an accusation that Paytas had blackmailed DeMartino into defending her. Hanna’s tweets are now deleted. DeMartino, meanwhile, said she had blocked Paytas on social media and said that Paytas had “manipulated” her into apologizing on Twitter.

On Twitter, Hanna wrote, “My BEAUTIFUL, AMAZING, SWEET FRIEND gabi demartino just called me sobbing because trisha had threatened her to make a post. She’s terrified and broken. This is crossing a line. Gabi does NOT deserve this.”

Hanna, meanwhile, also denied on Instagram that she had ever told anybody that Paytas had herpes.

Paytas and Hanna are both former members of David Dobrik’s Vlog Squad, but Paytas said the difference between the two is that Paytas can take the blame for her mistakes and that she, unlike Hanna, is not “evil.” Paytas, though, is adamant that she’s not blackmailing anybody.

“Me being pissed and angry at someone is different than blackmailing,” she said. “That’s the part where Gabbie Hanna needs to shut her freakin’ mouth. That’s a very serious accusation.”