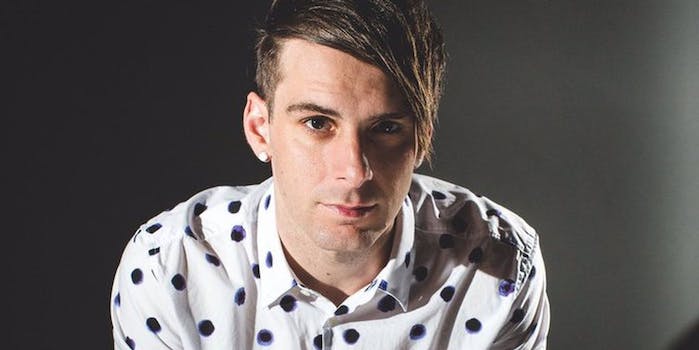 'I have never felt such freedom.'

Christian singer Trey Pearson made a name for himself as the lead singer of Everyday Sunday, but his most headline-grabbing achievement to date might be a heartfelt open letter he penned this week announcing that he is gay.

The 35-year-old singer says he published the letter this week, along with an interview for Religion News Service, after realizing, “There is absolutely no conflict with accepting who I am and following Jesus. God wants me to be healthy, authentic, whole, integrated and my truest self.”

Pearson is one of the most high-profile members of the Christian music community to come out publicly. With Everyday Sunday, Pearson has sold about a quarter of a million albums, and his 2009 album made it to the Billboard 200 chart. To boot, he has toured worldwide and performed with top Christian bands like Toby Mac, Switchfoot, and MercyMe.

Here is the full text of Pearson’s letter:

To my fans and friends:

Most of us reach at least one pivotal moment in our lives that better defines who we are.

These last several months have been the hardest – but have also ended up being the most freeing months — of my life.

To make an extremely long story short, I have come to be able to admit to myself, and to my family, that I am gay.

I grew up in a very conservative Christian home where I was taught that my sexual orientation was a matter of choice, and had put all my faith into that. I had never before admitted to myself that I was gay, let alone to anyone else. I never wanted to be gay. I was scared of what God would think and what all of these people I loved would think about me; so it never was an option for me. I have been suppressing these attractions and feelings since adolescence.  I’ve tried my whole life to be straight. I married a girl, and I even have two beautiful little kids. My daughter, Liv, is six and my son, Beckham, is two.

I had always romanticized the idea of falling in love with a woman; and having a family had always been my dream. In many ways, that dream has come true. But I have also come to realize a lot of time has passed in my life pushing away, blocking out and not dealing with real feelings going on inside of me. I have tried not to be gay for more than 20 years of my life. I found so much comfort as a teen in 1 Samuel 18-20 and the intimacy of Jonathan and David. I thought and hoped that such male intimacy could fulfill that void I felt in my desire for male companionship. I always thought if I could find these intimate friendships, then that would be enough.

Then I thought everything would come naturally on my wedding night. I honestly had never even made out with a girl before I got married. Of course, it felt anything but natural for me. Trying not to be gay, has only led to a desire for intimacy in friendships which pushed friends away, and it has resulted in a marriage where I couldn’t love or satisfy my wife in a way that she needed. Still, I tried to convince myself that this was what God wanted and that this would work. I thought all of those other feelings would stay away if I could just do this right.

When Lauren and I got married, I committed to loving her to the best of my ability, and I had the full intention of spending the rest of my life with her. Despite our best efforts, however, I have come to accept that there is nothing that is going to change who I am.

I have intensely mixed feelings about the changes that have resulted in my life. While I regret the way I was taught to handle this growing up, how much it has hurt me and the unintentional pain I have brought Lauren, I wouldn’t have the friendship I now have with her, and we wouldn’t have our two amazing, beautiful children. But if I keep trying to push this down it will end up hurting her even more.

I am never going to be able to change how I am, and no matter how healthy our relationship becomes, it’s never going to change what I know deep down: that I am gay. Lauren has been the most supportive, understanding, loving and gracious person I could ever ask for, as I have come to face this. And now I am trying to figure out how to co-parent while being her friend, and how to raise our children.

I have progressed so much in my faith over these last several years. I think I needed to be able to affirm other gay people before I could ever accept it for myself. Likewise, I couldn’t expect others to accept me how I am until I could come to terms with it first.

I know I have a long way to go. But if this honesty with myself about who I am, and who I was made by God to be, doesn’t constitute as the peace that passes all understanding, then I don’t know what does. It is like this weight I have been carrying my whole life has been lifted from me, and I have never felt such freedom.

In sharing this publicly I’m taking another step into health and wholeness by accepting myself, and every part of me. It’s not only an idea for me that I’m gay; It’s my life. This is me being authentic and real with myself and other people. This is a part of who I am.

I hope people will hear my heart, and that I will still be loved. I’m still the same guy, with the same heart, who wants to love God and love people with everything I have. This is a part of me I have come to be able to accept, and now it is a part of me that you know as well. I trust God to help love do the rest.
– Trey

Fans on Twitter have gone out of their way to show the singer support:

@treypearson congrats on taking a big stand! Love and support for your journey!

@treypearson – congratulations on your future happiness. God still loves you even more…

“I realized the only way I was ever going to be my best for [my children] was to be healthy myself,” he told Religion News Service.