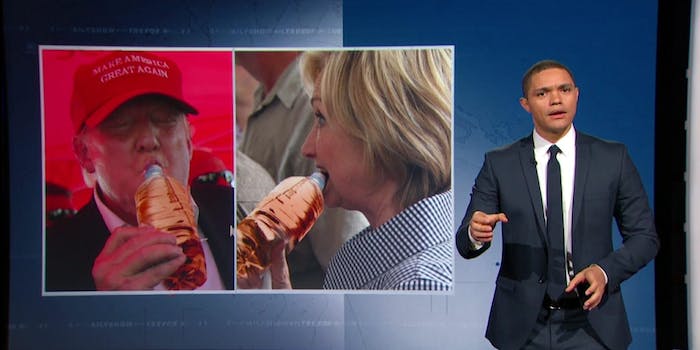 With Flint in the news, Trevor Noah reminds us of other cities with poisoned water

Flint is far from the only place where residents have lost trust in a basic utility.

The water crisis in Flint, Michigan is finally getting the national attention it desperately needs, but Trevor Noah is highlighting the country’s other Flints that are still flying under everyone’s radars.

The city was at the center of a recent Democratic debate between Hillary Clinton and Bernie Sanders, with the latter declaring that this wasn’t something that should happen in the U.S. in 2016 (though as Noah noted, however, the year doesn’t really matter with something like this).

Flint finally garnered attention right before a big presidential primary, and the town is now receiving big-time donations from the likes of Beyoncé, Cher, and Mark Wahlberg and Sean “Diddy” Combs. But as Noah pointed out on The Daily Show on Wednesday night, there are other towns that need Flint-like exposure to help solve their own water crises.

Take, for instance, Jackson, Mississippi. More than a dozen homes had high levels of lead in their drinking water, and officials warned pregnant women and young children not to drink it (but it’s OK for everyone else).

Or St. Joseph, Louisiana, whose residents were told the water was safe to drink despite being brown in color. Or Hoosick Falls, New York, which has contaminated water from a local plastics manufacturing plant.

There is also water with high amounts of lead in Sebring, Ohio, and many other cities across the country—some with residents still wary despite declarations that the water is safe again.

One solution? Noah proposes making the local water supply as visible to the candidates as the fried foods they eat in Iowa. Maybe then it might get some attention.