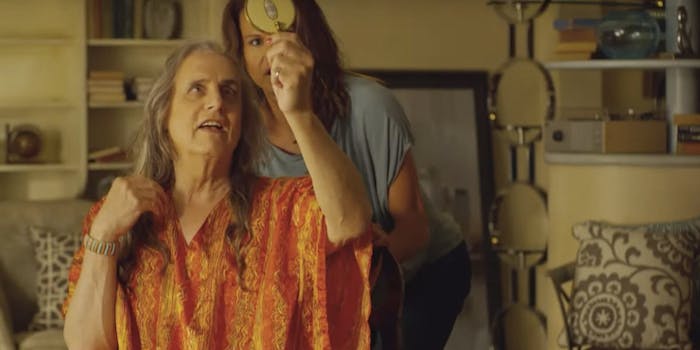 5 reasons to binge-watch season 1 of ‘Transparent’ this week

Last night, Amazon Prime made the first episode of the second season of Transparent available for streaming. The critically acclaimed series follows the ups and downs of the Pfefferman clan, including former patriarch Mort, who has recently made the decision to transition to womanhood as Maura. Jeffrey Tambor won several well-deserved awards for his performance in the lead role, taking home statues at both the Emmys and the Golden Globes, where the show also won Best Television Series – Comedy or Musical.

There are so many reasons to watch Transparent, but the five below should be enough to get you started. Now is the time to binge-watch season 1, so you can be ready when the rest of season 2 drops on Dec. 11.

1) It has the best ensemble cast on television

Tambor’s performance as Maura has been much discussed, and for good reason. As a cis male playing a trans woman, he’s done about the best job possible.

But Tambor isn’t the only reason to watch the show. Maura’s children, played with equal skill by Gaby Hoffman, Amy Landecker, and Jay Duplass, all do amazing work. As Ali, the youngest of the Pfeffermans, Hoffman in particular goes for broke every time, and received an Emmy nomination for outstanding supporting actress in comedy series for season 1. Judith Light, as Maura’s ex-wife, is also a wonder to behold, especially for viewers who may not know her from anything but her role as Angela on the ’80s sitcom Who’s the Boss.

The show is peppered with a fine array or character actors who filter in and out too, including Melora Hardin, Rob Huebel, Carrie Brownstein, Kathryn Hahn, Michaela Watkins, Tig Notaro, and Bradley Whitford, who won an Emmy for season 1. Expect more familiar faces in season 2, where Anjelica Huston and Cherry Jones will join the cast as well.

2) You’ll laugh and cry in the same episode

Transparent is labeled as a comedy, but that’s really only because its runtime is a half hour. Moments of dark, sly humor abound, but they are always tempered with a real sense of struggle and pain. In that way, Transparent is a lot like life: It doesn’t fit easily into any television mold, because life doesn’t fit one genre either. There is real suffering in this show, but it never feels overt or punishing. And there is real hilarity too, but it never arrives inorganically or comes at the expense of its characters. Tragedy and comedy exist side by side in the world of the Pfeffermans, and the show’s dizzying highs and low lows are part of why it is such a joy to watch, and why there is an inherent honesty at its center.

The Pfeffermans are not an easily definable group. Like all families, they make bad choices, they act irresponsibly, and they don’t always atone for their actions. There is love between these characters, but that love never manifests in some tidy resolution at the end of each episode.

Take the Pfefferman children. Each one is on a quest of self-discovery, and each of their quests feels as rocky and as uncertain as they would in real life. Ali experiments with gender identity. Josh (Duplass) deals with sex addiction, which may be brought on by experiences with a former babysitter that you could qualify as abuse. Sarah (Landecker) rediscovers her bisexuality as she’s entering middle age. There’s no “normal one” on among them, because are no “normal” people in the sense that television frequently defines humanity.

Transparent’s depiction of trans issues isn’t perfect. But what the show does get right is the struggle to make others see you as you really are, in a world where they are still largely told to do otherwise. Just because we’re aware of who Caitlyn Jenner is, does not mean that the trans community’s struggle to be seen, heard, and protected is over. Trans people are underpaid, and frequently harassed at work. Most states still don’t have laws governing trans people’s right to use the correct bathroom. As of last month, over 20 trans women have been murdered in the U.S. alone.

This is why shows like Transparent, which depict trans people not just as a talking point, but as thinking, breathing individuals, are so important. Part of the reason Maura’s relationship with her daughter feels so authentic is because it’s based on the one between Transparent’s creator, Jill Soloway, and her own father, who came out as trans late in life. Not that trans representation is the whole whole scope of Soloway’s interests. “Forget the forgotten T. Where’s the forgotten B?”, said Soloway, discussing her representation of Sarah’s bisexuality.

In that sense, Transparent’s version of representation is all-encompassing, and yet it never lets the audience forget that women like Maura are more than cyphers for us to project our own questions onto. Both Maura and the other trans people on the show are specific, defined individuals even within their community, and ultimately, their ability to transcend simple labels is probably the show’s biggest representative victory of all.

Speaking of the other trans people on Transparent, it’s important to note that Tambor is the only individual on the show playing a trans person who is not actually trans in real life. Both in front of and behind the camera, Soloway has amassed an impressive team of trans actors and crew members.

Speaking to Entertainment Weekly about the upcoming season, Transparent’s first trans director, Silas Howard, said that, “It’s a big deal because it feels like instead of being put into the system that isn’t necessarily integrated, I’m in the room with all these professional, incredibly talented people and they come from a lot of different backgrounds.”

“We have other things interesting about us besides being trans,” Howard continues. “I looked for opportunities where a sort of paradoxical quality is happening, where things are messed up and beautiful at the same time, or funny and tragic.”

It appears as if Howard was interested in working on Transparent for the same reasons so many of us watch it. To that end, Dec. 11 can’t get here soon enough.