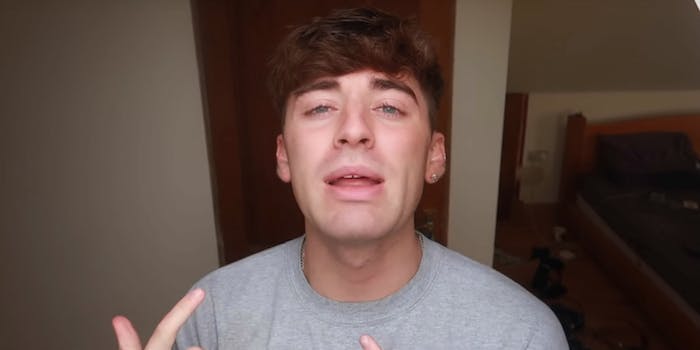 The YouTuber is known for making clickbait videos featuring his '13-year-old sister.'

YouTube is, as some call it, an “ecosystem,” and like any ecosystem, it’s full of inhabitants who bounce off of and impact each other in countless ways. It’s also full of bare-knuckle drama, and that’s just what YouTuber Touchdalight fed into when he admitted to using “incest clickbait” in video thumbnails in order to get more views and subscribers—and profiting off the ensuing disgust from the community. The admission and prior controversy sparked off some inter-YouTuber dissing that’s only gotten more heated.

The saga began with YouTube’s recent decision to axe numerous videos the company deemed inappropriate for its platform. Examples include a channel that posted hundreds of sexualized videos of an Asian woman nursing children and exposing her underwear while performing chores, as well as a channel known for reviewing different brands of cigarettes.

“Yeah, no shit I do incest clickbait,” Touchdalight, aka Carmie Sellitto, said in video posted Friday. “It’s funny for me. I literally pretend my 18-year-old friend is my sister and people literally get triggered about it. When people get triggered about my shit, I get money and I get views. There’s a reason I actually do it. The more triggered people I attract, the more clout and views I get.”

Popular YouTuber Daniel “Keemstar” Keem had taken to criticizing YouTube for deplatforming content like the cigarette review channel while allowing Touchdalight’s incest clickbait to proliferate. Keemstar posted a short video elaborating on his frustrations with YouTube and how it allows Touchdalight to continue posting clickbait content.

Touch by the light clarification. pic.twitter.com/y6If0zDRHO

Touchdalight also called Keemstar a “massive pussy” and an “old ugly man” in his video.

“I don’t support getting people’s YouTube channels taken down or deplatforming people off the internet,” Keemstar said. “I just don’t understand how his channel is not affected, but some of these others are. I’m trying to understand why some channels get taken down and his isn’t.”

In his latest video, Touchdalight claimed that he hasn’t made any money off of his videos for “the past couple months.”