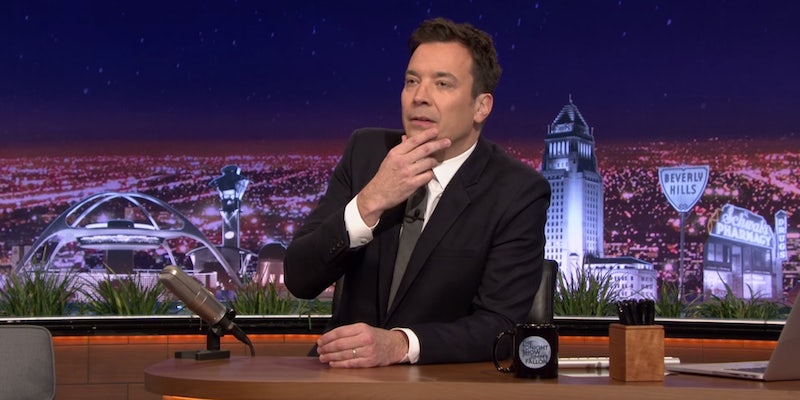 'Saved by the Bell' is only the latest in a long line of calculated viral hits.

Can you remember a single guest on NBC’s The Tonight Show last week, someone who sat in the armchair to the right of Jimmy Fallon? For me, only one comes to mind: Will Smith. That’s probably because my Facebook feed was atwitter with news that Smith and Fallon, the show’s host, both beatboxed “It Takes Two,” the Rob Base and DJ E-Z Rock hit from 1988. The performance itself overshadowed why Smith was even on the show—presumably to promote the Smith Family Empire—capping off a monumental week of viral, shareable nostalgia on The Tonight Show.

As fewer eyes focus on actual TVs and more on computer, tablet, and phone screens, the nature of television must adapt. The fact that you’re seeing more and more of Fallon’s lighthearted stunts in your social media indicates that he and the producers of The Tonight Show are well aware of the need to feed the beast, and the public is eating it right up. Of course, Fallon’s certainly not the first of the contemporary late night hosts to hop aboard the viral train. Jimmy Kimmel, host of Jimmy Kimmel Live on ABC, has proven time and time again that he’s got the chops to create viral hysteria. How can we forget “Worst Twerk Fail EVER – Girl Catches Fire!”? I would also argue that Kimmel was well ahead of the times in 2009, when Sarah Silverman, his girlfriend at the time, performed “I’m F**king Matt Damon” on the show. But where Kimmel excels in pranks and mild trolling, Fallon surpasses in nostalgia and overall mass appeal.

The most talked-about moment from last week’s run of The Tonight Show is easily the Saved by the Bell reunion. With over 25 million views in less than a week, the stunt is well on its way to becoming the No. 1 most viewed segment on the program’s YouTube channel. (The title currently belongs to “Lip Sync Battle with Emma Stone,” from nine months ago, with over 43 million views.) Fallon’s flashback to his days at Bayside High featured the original cast of Saved by the Bell—with the exception of Lisa (Lark Voorhies) and Screech (Dustin Diamond)—and that’s just about it. Was the skit funny? Not to this author. Was it well-written? That depends on your definition of “written.” It was more of a collage of notable moments, regurgitated theme song lyrics, and poorly aged quirks from the series. I mean, could that mobile phone be any bigger? Sure, you could say that he’s paying homage to an influential force of ’90s pop culture, but when you factor in the fact that Fallon was 19 when the series ended, just a couple years north of the show’s intended demographic (9-14), it becomes clear that Fallon is really reaching for the clicks of… millennials.

From an economic perspective, the role of nostalgia in The Tonight Show makes perfect sense. According to Amy Holdsworth, author of Television, Memory, and Nostalgia, the use of nostalgia in television “corresponds with the commercial safety of reproducing past successes and familiar forms.” Holdsworth adds that nostalgia, especially in a benign, inoffensive way, provides the “safety of distance.” With Saved by the Bell, for instance, Fallon isn’t interested in examining the complexities of 1990s California; waxing nostalgically over Pete Wilson’s governorship wouldn’t exactly send the right message to Tonight Show’s audience. Instead, he’s aiming to appeal to the fondest memories of his audience and their collective networks, but he doesn’t do much more beyond that. (Leave the heavy interrogation to Tumblr.)

In a 2010 article about the “false nostalgia” of VH1’s I Love the [Decade] shows, Josh Kurp writes:

VH1 was the first instance of being told that something in the near-past of pop culture was cool, or at least delightfully campy, and presented these relics in such a way that it was easy to quote and talk about with your friends, instead of actually discussing why Back to the Future was actually an important film. Everything became a giant in-joke that everyone was supposed to get.

Like the VH1 talking-head shows, The Tonight Show uses its platform to pick and choose which moments are worthy of remembering and sharing—but with the bonus of clicks and shares. The ’90s-heavy tributes from last week also don’t explicitly say why Saved by the Bell or The Fresh Prince of Bel-Air were important, just that they were important by mere inclusion. But if that’s the case, why are these moments shared at such a rapid, almost alarming, rate? Well, humans are just wired that way.

For a video, picture, article, tweet, cat, dog, or parakeet to go viral, it has to elicit an emotional response that prompts a share within a group of like-minded friends. If that response is laughter, even better. With Kimmel’s “Twerk Fail,” the response was a collective schadenfreude (which often involves laughter, however ill-intentioned) followed by shock when Kimmel revealed he was behind the prank. Although Fallon’s work may not be quite as laughter-inducing, the nostalgic element will certainly cause a smile. The added element of social validation may play into why The Tonight Show’s use of nostalgia is so successful. Maybe everyone wants in on the memory; maybe we just want to say, “I remember this, too!”

At the end of the day, the typical talk-show format is a thing of the past. Television has grown beyond the glass and tubes and circuitry, outside the living room, and into the cloud. Jimmy Fallon and The Tonight Show are simply tugging at the strings of viewers and non-viewers alike to bring the talk show into the 21st century, for better or worse. Until the next cultural shift takes place, Fallon’s definitely going to summon millennials’ sense of nostalgia and reach unimaginable levels of shareability. It’s really only a matter of time before he “does the Urkel” with Jaleel White or frolics through San Francisco with the cast of Full House.