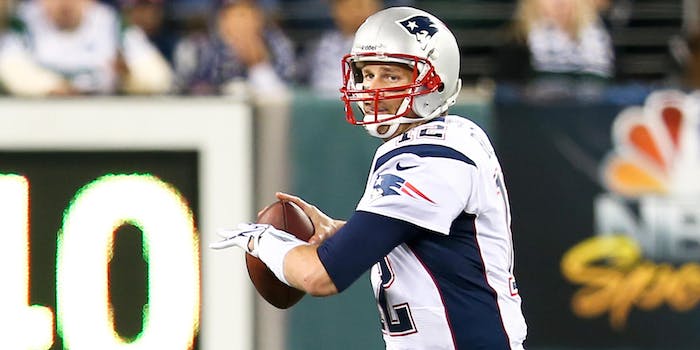 Brady said his cameo was 'taken out of context.'

Netflix’s newest comedy, Living with Yourself, which stars Paul Rudd, recently found itself in controversy over a scene in which guest star and New England Patriots quarterback Tom Brady walks out of a fishy massage parlor.

Rudd impressively stars as two people in the comedy, but the hoopla has been about the six-time Super Bowl winner’s cameo in the first episode. A beaming Brady encounters Rudd’s character, Miles, as he makes his way out of a massage parlor called the Top Happy Spa.

“Uh-huh,” the startled Miles replies. “You?”

The quarterback gets into a luxury SUV, grinning. “Sixth.”

The predicament started when Deadline published a piece Friday insinuating the scene made a mockery of Patriots owner Robert Kraft’s humiliating massage parlor bust, which was part of a human trafficking sting.

Reporters asked Brady about the cameo during a press conference on Friday. The quarterback became incensed at the notion that he would make fun of his owner’s brief fall.

Tom Brady answers questions about his cameo on a Netflix show and he wasn’t happy. pic.twitter.com/WpI7mrfGJy

“That’s not what that was about,” Brady said. “I think that was taken out of context, just like you’re taking it out of context and trying to make it a story for yourself, which has a negative connotation to it, which I don’t appreciate. It was meant to be something different than that. The fact that it’s a distraction, or you’re bringing it up, is not something I want to be talking about.”

Brady also explained that the scene had been shot years ago.

“It was written four years ago,” he explained. “Again, it’s unfortunate that people would choose to think I would ever do something like that about Mr. Kraft. I think that’s a very bad assessment of my relationship with him. I would never do that.”

For his part, Living with Yourself creator Timothy Greenberg couldn’t believe he found a way to get Brady into his show.

“When I wrote the script, I was like, ‘Here’s a guy that seems ageless and he’s still performing so well because he’s 37 years old and he just won his fourth Super Bowl,'” Greenberg told Refinery29. “Four years later, the guy is now 41, and he’s won six Super Bowls. He just won another Super Bowl!”