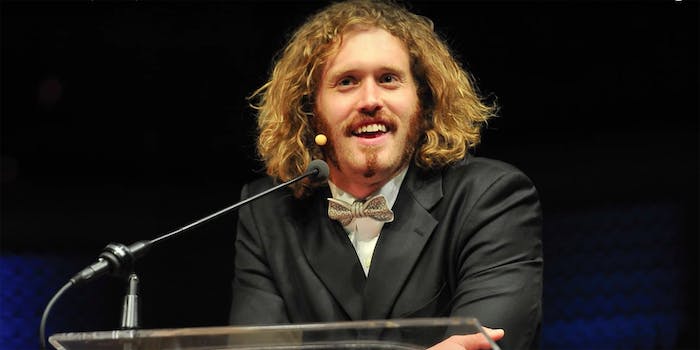 The claims are piling up.

Former Silicon Valley star T.J. Miller was arrested on Monday night and faces a maximum of five years in prison after calling in a false bomb threat on a train in March, authorities said.

A criminal complaint said Miller called a 911 dispatcher in New Jersey saying that a female passenger “has a bomb in her bag,” Page Six reported. Miller was on an Amtrak train traveling from Washington, D.C., to Penn Station.

Bomb squad members stopped the train in Connecticut and found no evidence of an explosive device. An investigator who spoke with Miller said he noticed Miller slurring his words. When the officer asked whether Miller had been drinking alcohol, he said he had “one glass of red wine.”

The Wrap reported a first-class car attendant on the train said the actor “appeared intoxicated when boarding the train and had multiple drinks while onboard.”

Miller also apparently had hostile interactions with a woman on the train, according to the same attendant, but authorities confirmed the woman did not have the same type of bag Miller described over the phone. Miller’s descriptions of the woman he thought had a bomb were conflicting and included one description where the woman had brown hair and another where she was a red-head.

Miller was arrested at LaGuardia Airport, charged with intentionally conveying false information to law enforcement, and released on $100,000 bail.

This is not the first controversy surrounding the comedian-turned-actor. In March, the Hollywood Reporter sat down with the Silicon Valley cast who worked with Miller and several cast members “veiled references to (Miller’s) ‘demons’ and the fact that he’s been known to self-medicate with alcohol and other substances.”

Miller has previously talked in his standup about drinking “till [he] passed out.” According to the Hollywood Reporter, Miller looked to have things under control but eventually left the show when his disinterest on-set began to show.

Miller has also been accused of sexual assault by an ex-girlfriend from college and was previously arrested for slapping an Uber driver in 2016 “over a disagreement about Donald Trump,” according to the Guardian.

It seems Miller’s original claim to investigators about a bomb being on the train was false, but Miller apparently “continued to convey false information to investigators while the public safety response was ongoing,” Page Six reports.