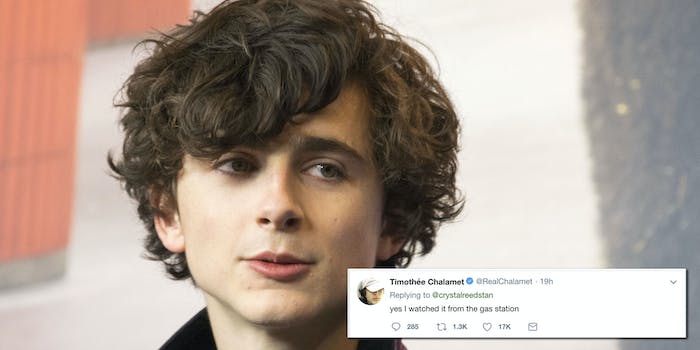 The young actor had the perfect response to John Mulaney's joke.

Timothée Chalamet sent his fandom into a tweetstorm on Monday after he said he watched John Mulaney’s jokes about him on Seth Rogen’s Hilarity for Charity—inside a gas station.

It all began when one fan tweeted to the 21-year-old actor, asking if he’d watched the segment, in which Mulaney refers to Chalamet as “the kid” and jokingly complains about his wife’s obsession with him.

Chalamet quipped back just three minutes later, “Yes I watched it from the gas station.”

yes I️ watched it from the gas station

The gas station detail is a clever reference to his look at the Spirit Awards, which was hosted by Mulaney and Nick Kroll. Chalamet’s choice of outfit caused him to trend on Twitter.

His fans thought it was hilarious and flooded his mentions with photoshopped images of him working at a gas station.

Shouldn’t you be working and not watching videos!? pic.twitter.com/kEDI18Z8as

Mulaney also responded to Chalamet’s tweet and clarified that he is actually an enormous fan.

Chalamet, I joke ONLY because I am an enormous fan, in awe of your talent, & terrified of my own age and mortality. Also it turns out you are 6’0. Please accept my apology. You’re a good man and we should do the Amazin Race together if you’re free. Im free. https://t.co/oXBoo5Fsjn

The jokes made by Mulaney can be found in Hilarity for Charity, which became available for streaming on Netflix earlier this month.