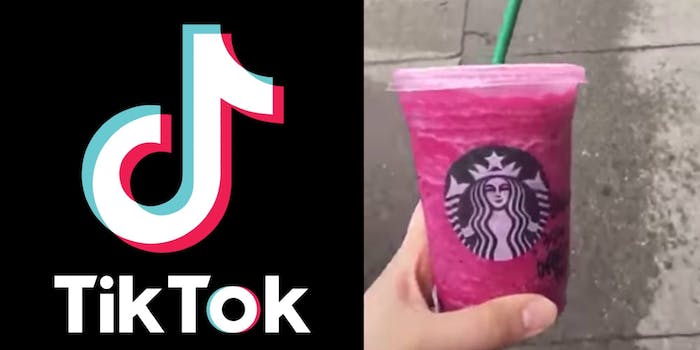 What is the TikTok drink and can you still get it?

The TikTok drink is real, folks.

2019 is all about the memes—and the TikTok drink is no exception.

With our busy lives, stressful schedules, and short attention spans, memes are often the only good thing we have time for. Memes have evolved from their simple, picture-oriented roots. Now a meme can be almost anything, from a phrase or quote to dances, trends, and challenges.

To that end, TikTok has been instrumental in the evolution of the meme and even inspired a drink. Does that count as a meme? Only the internet historians of the future can know for sure.

Regardless of its meme status, the TikTok drink is a real thing. People first started talking about it months ago, but the hype surrounding it continues. Despite the drink’s popularity, there is a large swath of the population that has no idea what the drink even is.

It’s not “yee-yee juice” or something heavily featuring absinthe. The TikTok drink is actually a Starbucks beverage, and people say it’s pretty tasty.

What is the TikTok drink?

The official name of the drink isn’t “TikTok drink,” but the name has stuck nonetheless.

Over the summer, dozens of Starbucks baristas found themselves inundated with requests for a TikTok drink they’ve never heard of before. One redditor even turned the forum community about the rumored beverage.

“Am I missing something, or…? Had some girls come in and ask me if the drink was real,” user SwordsDivineLight wrote on the Starbucks Reddit in June. “I’ve tried looking up anything on secret menu, but haven’t found anything other than that tea meme. Anyone know what they were talking about or have a more cohesive idea?”

The responses were immediate and informative.

“I’ve had well over a dozen kids ordering this drink in the last month,” user HappyBarista wrote. “It’s the strawberry refresher with three scoops strawberries and three scoops blackberries. Blended with the matching size scoop of ice. It’s very sweet/sugary.”

Other commenters concurred on the recipe, though most agreed that the drink isn’t very good. Some baristas recommended adding a scoop of raspberry to enhance the flavor, while others advised against ordering it at all.

Can you still get the TikTok drink?

Based on the response from Starbucks baristas, you can still purchase the TikTok drink if you are so inclined. While it does not appear to be an item on the menu—at least in most Starbucks locations—your barista will probably still make it for you. Ask politely and, for heaven’s sake, tip your baristas. And your servers for that matter. They work hard, and hourly pay for servers in some states is as low as $2.14. Now, what was I saying?

Right. You can order the TikTok drink from most Starbucks locations but probably not based on name alone. If you are looking for the beverage described above, just ask for that. Any requests for a “TikTok drink” or “the TikTok” will likely be returned by blank stares and confused glances.

There is also a chance that the TikTok drink you’ve heard of is, in fact, nothing but a meme. On the same Reddit thread, one barista discussed a very annoying TikTok trend involving Starbucks.

“Watch out for the Tik Tok trend of teens ordering a grande ____ and then when you hand it off they say, ‘Umm actually I ordered a venti,’” redditor happypoptart0 wrote.

Apparently the practice became a trend over the summer after a TikToker uploaded a tutorial explaining how to successfully pull off the trick. Considering the move is technically stealing—you paid for a grande, not a venti—maybe don’t try this one out? Thankfully, most baristas seem to be onto the move. Let’s hope the few dickbags willing to try out something so unnecessarily rude will end up thoroughly embarrassed by their antics.

How to make the drink

For penny-pinchers like me, a trip to Starbucks isn’t always an option. Instead, we make our own sad, far-less-caffeinated versions of our favorite drinks at home. Thanks to a TikTok video from user @emmalake_, uploaded to YouTube by user skinny legand, we now know the recipe for the much-sought-after TikTok beverage.

According to the video, the real trick is replacing the blackberries with dragon fruit.

For this particular recipe, you want to start off with a strawberry acai refresher. Thankfully, one of the kind denizens of the internet already composed a recipe for the refresher. Then you add lemonade—for that nice citrus zing—three scoops of strawberries, and three scoops of dragon fruit. Make sure it’s all blended up to get that real TikTok pink color, and you’re golden.

It may not be the best winter drink, but you can feel the TikTok with every sip.