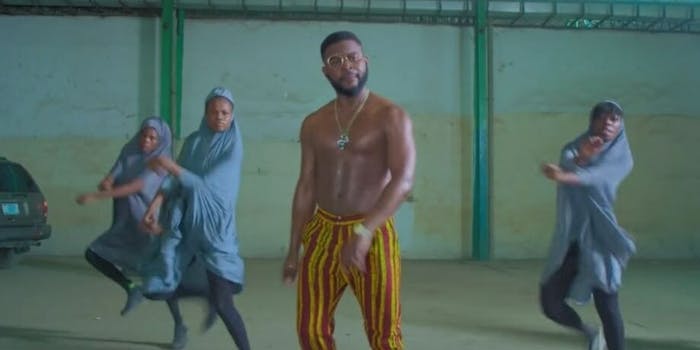 A Nigerian version of Childish Gambino’s “This Is America” that has been viewed millions of times on YouTube has been banned from being played in the African country. Now, some are angered at the censorship of the song that is trying to raise awareness for Nigeria’s problems.

Falz’s “This Is Nigeria” is a takeoff of “This Is America,” and like Childish Gambino’s hit that discusses a myriad of American issues, Falz’s version portrays a number of social problems that plague Nigeria, including a drug crisis and the 2014 kidnapping of 276 school girls by Boko Haram.

But as CNN reports, a Nigerian radio station has been fined for playing the song because of “indecent and vulgar” lyrics. That’s according to the determination of Nigeria’s National Broadcasting Commission (NBC) which sent a letter highlighting the lyrics, “This is Nigeria, look how we are living now, everybody be criminal.”

Apparently Falz's line "this is Nigeria; look how we living now. everybody be criminal" has been flagged "vulgar" and the song is now declared "unfit for radio".

See why sometimes I can't blame our musicians if they choose to give social commentary a wide berth? pic.twitter.com/7bp3ZENluK

As a result, the NBC fined the radio station the equivalent of $278. Falz has expressed his displeasure at the decision.

“I am not happy that the NBC is preventing the people from listening to such strong messages that need to be heard. I will not relent and that is why my next album is important,” the Nigerian rapper said in a statement, via CNN. “There is a lot going on that needs to be talked about, even though a lot of people may not want to hear the truth.”

Since the NBC letter, the Socio-Economic Rights and Accountability Project (SERAP), a Nigerian non-profit organization that promotes “transparency and respect for socio-economic rights,” has blasted the NBC’s decision.

“The right to freedom of expression, information and ideas is applicable not only to comfortable, inoffensive or politically correct opinions, but also to ideas that offend, shock and disturb,” SERAP said in a statement. “The constant confrontation of ideas, even controversial ones, is a stepping stone to achieving a vibrant democratic society, transparency, accountability and respect for the rule of law … Vague rules on vulgarity and indecency should not be used subjectively to ban or fine independent media outlets, particularly radio and television channels.”

“This is Nigeria” has been viewed more than 13.1 million times on YouTube.