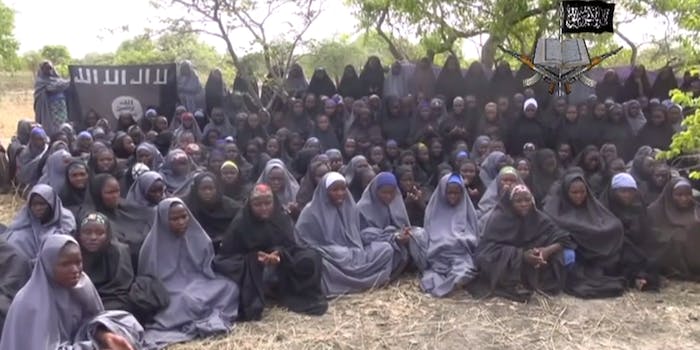 It might be the first footage of the Nigerian schoolgirls since they were abducted from their boarding school on Apr. 14.

A new video from Boko Haram, obtained by Agence France-Presse news agency, reportedly gives the world a first glimpse of the Nigerian schoolgirls since they were taken from their boarding school nearly a month ago.

Approximately 130 girls shown, all of them wearing full hijab. Three girls speak in the 17-minute video, according to the BBC. Two girls tell the camera that they were Christian but converted to Islam while a third stated that she is Muslim. It is unclear when the video was shot, but one said that they have not been harmed.

“These girls, these girls you occupy yourselves with… we have indeed liberated them. These girls have become Muslims,” Abubakar Shekau says.

Boko Haram, the Islamist militant group who claimed responsibility for kidnapping the girls, said that they liberated them and demanded the release of all militants held by the government in exchange for the around 220 Nigerian girls still missing.