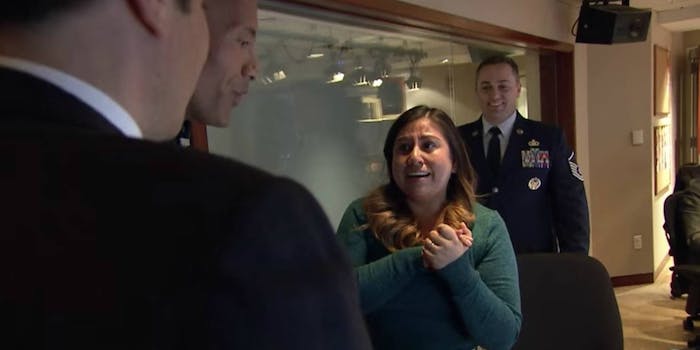 Screengrab via The Tonight Show with Jimmy Fallon/YouTube

When the Rock isn’t dressing up like a superhero, he gets to play one on TV. That was true Friday to at least Tonight Show one producer.

During his interview with Jimmy Fallon, the Rock said he had a surprise for a military family that was in the audience. That wasn’t exactly true. Turns out the surprise was set for a Tonight Show producer named Karina, who also happens to be a military veteran herself.

She didn’t know, but her husband, Todd, a U.S. Air Force master sergeant who is deployed overseas and who’s been living apart from his wife for the last 18 months, was set to give her one of the biggest surprises of her life.

It’s OK if you’re crying right now. Even Fallon couldn’t stop himself from tearing up at the joyous and unexpected reunion.