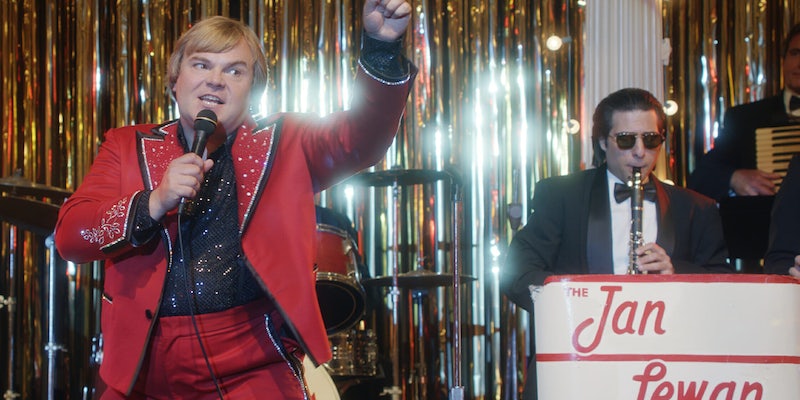 Based on a true story, this dark comedy almost works.

The Polka King, by writing-directing team Maya Forbes and Wallace Wolodarsky, is a disjointed film about an odd subject. From Jack Black’s lead performance to some of the storytelling decisions, it never coalesces. The Netflix film is equal parts dark comedy and biopic, but the true-crime story just isn’t salacious enough.

Jan Lewandowski, who goes by the rhyming Jan Lewan, was indicted in 2004 for running a Ponzi scheme. He bilked his victims out of $4 million. Jan spun the ill-gotten cash into a music empire. Before becoming a criminal he was best known for his polka music. Black plays Jan as a happy-go-lucky outsider, someone who is happy to be carving out his piece of the American dream. Black affects a high-pitched voice and couples it with just enough broken English to disarm Jan. It’s a performance, and film, that calls to mind Black’s turn in Richard Linklater’s Bernie. To help strike the right tonal balance Linklater mixed in talking-head interviews of real people. It helped his mix of murder and East Texas hospitality go down smooth.

The Polka King badly needs an extra layer or element to strike and maintain the tricky tone it aims for. Something to tie it all together. Forbes and Wolodarsky based their film on the 2009 documentary The Man Who Would Be Polka King. Some of their quirkier touches come from the comic throw-ins that don’t serve a purpose. Take Vanessa Bayer for instance. She plays Bikini Bear, a bear costume-wearing member of Jan’s polka band. She makes a few funny faces and innuendos aimed at another band member. It’s a running thing that is only saved by Buyer’s genius as a performer but doesn’t advance the plot. For a supposedly lean movie that is less than 95 minutes long, there is a surprising amount of fat.

In dramatizing Lewan’s rise and fall, the film expects you to just accept things because, well, that’s what happened in real life. It’s one thing to buy into Lewan swindling elderly and otherwise unassuming people with a relatively amateur scheme. It’s another thing buy that the agent called in to question Lewan (JB Smoove) was actually that bumbling. Part of the reason it is difficult to make that jump is Black’s performance. Black is underrated as a dramatic actor, but here it feels like he’s doing shtick more than anything else. So Jan, though an outsider in his Pennsylvania community, feels like an alien because it’s hard to get a feel for him as a real person. By virtue of that, the movie is alienating, because Jan isn’t as compelling as he should be (and is in real life), and everyone else comes off as dumb. It’s a shame because it detracts from the stronger aspects of the film, namely Jenny Slate as Jan’s wife Marla and Jacki Weaver as Marla’s mother.

The film moves through Jan’s plan dutifully and we see him sweat as he gets in deeper to the point where he has no recourse but to continue the scam until someone finally calls him out. To the film’s credit, the scene where Jan gets arrested is well-staged, with Jan at the bedside of his badly hurt son. Forbes and Wolodarsky have Jan pray for his son’s salvation in exchange for Jan owning up to his crimes. This use of Jan’s faith could have been an interesting thread, but the scene plays like a cosmic joke. Jan mentions the pope a few times, but it never amounts to something significant. It’s indicative of a larger issue, which is the characterization of Jan beyond Black’s performance. The character is driven by greed, but the movie doesn’t dig into that. Jan is an amalgam of characteristics that operate almost independently of one another.

The movie lacks a strong sense of tone and direction. The Polka King has a few things to offer viewers, but it’s more of a missed opportunity than anything else.