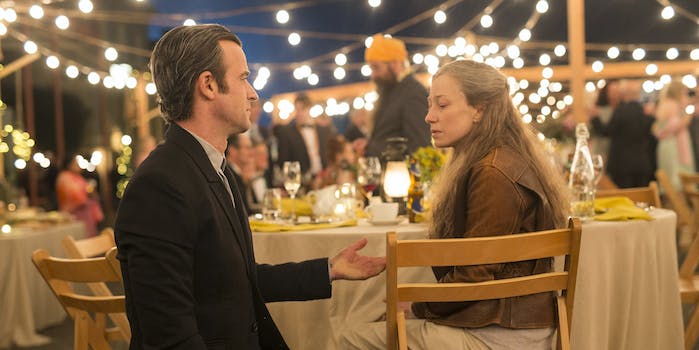 Streaming TV Party: How ‘The Leftovers’ crafted the perfect ending

Warning: This newsletter contains spoilers for all three seasons of The Leftovers. Catch up here with Streaming TV Party’s previous newsletters—and sign up to receive the best of the internet straight to your inbox.

“This is a love story”

The concept of Damon Lindelof as a romantic is certainly not a new one, as several critics pointed out during Watchmen’s run. Indiewire’s Libby Hill expanded upon it in December, writing that “Understanding romantic relationships within Lindelof’s universes is to accept that love is a thermodynamic miracle.” Lost’s best episode, season 4’s “The Constant,” is a time-travel saga that ends with a life-saving phone call on Christmas Eve. At the heart of Watchmen is a love story that’s doomed from the start but still worth pursuing.

Because of that comparison, I knew in the general sense that Kevin Garvey and Nora Durst was one for the ages. What I wasn’t aware of was just how much of The Leftovers’ final two episodes established that. After “The Most Powerful Man in the World (and His Identical Twin Brother),” Kevin spent two weeks every year for a full decade searching for Nora in Australia because he was convinced she wasn’t gone. He did this not knowing if she would accept him or still love him when he eventually found her (or even if she still lived), and he did it anyway.

It’s a grandstanding epic, one that felt both akin to “The Constant” and something like Odysseus’ 20-year journey home in The Odyssey. But more importantly, it felt real and like a tangible thing. (Predictably, I was a mess off-and-on during “The Book of Nora” but I started sobbing when Kevin showed up at her door.)

If you want the safest option on the market when it comes to a face mask, pick an FDA-registered surgical mask. However, authentic ones are difficult to find. We can tell you exactly what goes into making one, why it’s the best choice, and where to buy it.

Would you blow up one world to save another?

For most of The Leftovers’ run, Kevin has been put on a pedestal. He was the chief of police in a small town. He was the man who could die (multiple times!) and rise from the dead after visiting a version of Purgatory where he got to play out fantasies of being an assassin, a cop, and the president. Matt cast him as the Messiah as everyone demanded more of him. In his final trip, the dead interrogated Kevin’s intentions of returning: “You just do what they tell you to do…What do you want?” “Do you believe that?” “Well, what do you want?”

The penultimate episode really boils down to the final page of the romance novel Kevin wrote. Both versions follow a man on a boat called Merciful and his search for a woman he lost. The beach hut page had the man searching for the woman while the bunker room page showed him giving up. The latter is more devastating, depicting himself as a coward afraid of being small. He could revel in his Messiah complex or he could be with someone who accepts him—but not both. It’s ultimately not much of a question as to what Kevin wants. He kills his other self and destroys Purgatory with Patti Levin by his side to watch the beauty in the destruction.

The biggest lingering question that will never be answered

“The Book of Nora” more or less had an explanation for every single question you could ask for from where the Departed went to (in a sense) to everyone’s fates including Laurie and Matt. The bigger question remains in one of the show’s final scenes: Is Nora telling the truth when she tells Kevin about what happened to her after she went into the machine?

While I vaguely knew that The Leftovers had an open ending, it didn’t occur to me that she might’ve made everything up until a friend asked me if I believed Nora; of course, I believed her. But the other reading of it, that Nora lied about it to explain to Kevin why she spent the past decade hiding. Both interpretations work surprisingly well.

“We have a unanimous feeling as to which one of those realities is real and we will never, ever, say, ‘This is what really happened,’” Lindelof told Vulture in 2017. “Kevin believes, or says he believes, the story; that’s the whole point of the series. That’s what religion is.”

Here are just a few things I’ve checked out this week or will be reading/watching in the coming days. Since they’re of interest to me, I figured they might be to you, too.

Next Week: One final look back at The Leftovers, the connecting series between Lost and Watchmen in Lindelof’s television pantheon.