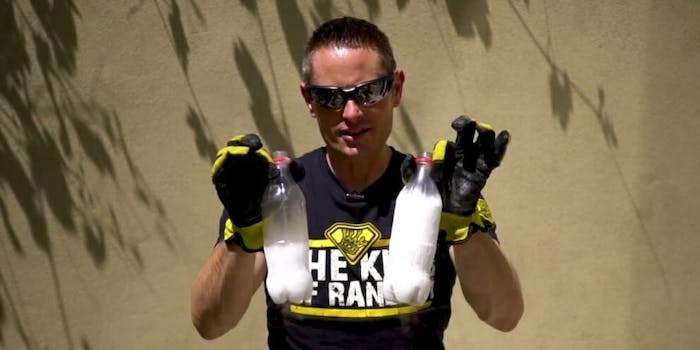 He's expected in court next month.

The YouTuber who runs the King of Random channel, which boasts nearly 9 million subscribers, has been charged with two counts of felony possession of an explosive device.

Jonathan Grant Thompson, 37, who runs science experiments on his YouTube channel, was charged months after one of his experiments injured one of his friends, according to KSL.com. Thompson caught the attention of the South Jordan, Utah, police last June when officers received a tip that he had filmed himself exploding dry ice bombs in his backyard and then posted the videos to YouTube.

That same month, Thompson posted this video of dry ice exploding in a Coke bottle. (It has 1.4 million views, and one commenter wrote seven months ago, “I bet your neighbors love you.”)

Said Thompson during the experiment, “Dude, that was a big explosion.”

In August, South Jordan police arrived at his house after another complaint of an explosion. He reportedly told officers about the scope of his YouTube channel. According to the police, he told officers that his friend had “left him with a bag of unknown powder substance.” Thompson and 20-year-old Timothy Burgess, who was also arrested and charged with one count of possession of an explosive device, lit the powder a few times, and eventually, an explosion sent “small flaming particles into the air.” Some of those particles landed on Burgess’ leg and arm and burned off some of his hair.

According to the website, firefighters who were at a station five minutes away from Thompson’s house heard the explosion.

Thompson said he was upset by the charges, telling the Salt Lake Tribune, “It makes it seem like I am an irresponsible YouTuber who is blowing stuff up.”

His initial court date has been set for Feb. 21.