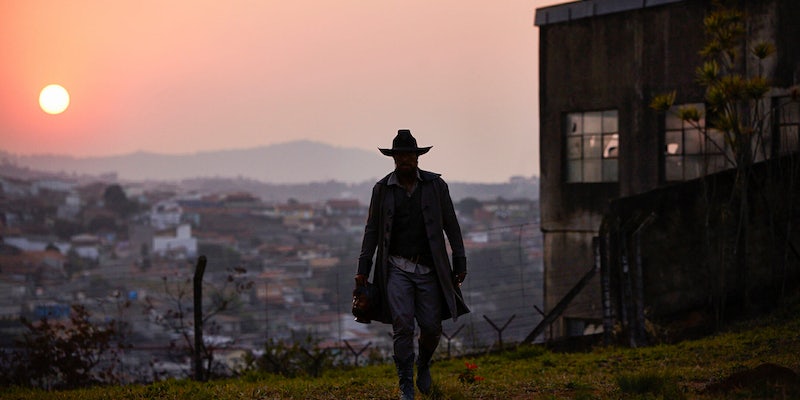 The high-shooting Brazilian film will leave you with white knuckles.

Netflix’s latest original release, the gritty Marcelo Galvão-directed heavyweight Western The Killer, represents a rousing success in the streaming giant’s continued foray into international markets. The Portuguese-language shoot-em-up film cuts no corners on its serpentine story or its up-close-and-personal details in getting its point across. It’s long on purposeful and incidental death, as well as blunt-force trauma.

Branded as O Matador outside of the United States, the film stars Portuguese actor Diogo Morgado as Cabeleira, a manchild assassin searching for his adopted father through the lawless badlands of Pernambuco, Brazil. What starts as a story told by a man hoping to protect his children from outlaw brothers, deep dives into a calmly told tale with a personal connection.

Morgado, who starred as Jesus Christ in both the problematic History Channel miniseries The Bible, and in the 2014 film Son of God, provides the mush-mouthed character an almost animalistic outlook and disposition. It’s appropriate given our protagonist was left in the wilderness as a baby, then raised in complete isolation by a contract killer named Seven Ears.

Seven Ears would teach the boy with no name everything about survival, coming and going to kill landowners for the vile degenerate “Frenchman,” Monsieur Blanchard (chillingly portrayed by Etienne Chicot). However, one day Seven Ears doesn’t make it back.

After years of fending for himself, Cabeleira decides to strike out barefoot on his quest to find his adoptive father, which leads him to a nearby town. He quickly learns the tricks of a newfound trade, working for Blanchard. Through Blanchard, he learns about women, one of which he finds gave birth to a son who shows up on his doorstep.

The film changes course and viewpoints, including the stories of Blanchard, sets of renegade outfits, intriguing baddies, and also of a man looking to avenge the death of his family. However, it all circles back to both Cabeleira and the storyteller. It’s a somewhat predictable final reveal, except for the growing, implicit understanding that telling the story puts our narrator in danger.

The Killer‘s grime and over-the-top nature—and Morgado’s strong performance—make it a highly entertaining affair. Galvão’s vision of the Brazilian hinterland elevates the picture to the upper reaches. Aside from the language, the viewer is transported into a new “Wild West” that isn’t Western at all. It looks and feels Brazilian, even down to the Northeastern accents.

Fulfilling and efficient, the director muddles up your regular programming, eschewing attempts to mark all of the Leone/Eastwood spaghetti Western checklist. The Killer marks a new territory for Westerns, outlaw spirit and all.