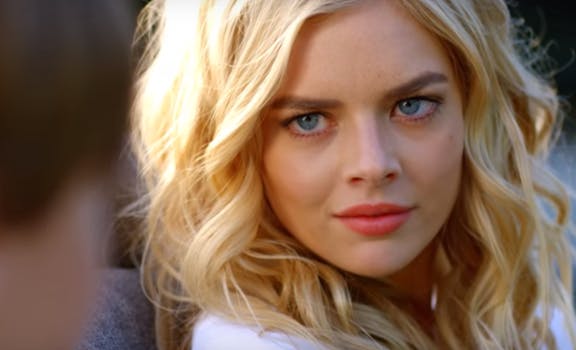 This campy horror flick has some great arterial sprays, but you’ll forget about it by the time Netflix auto-plays whatever's next.

It feels like a paradox to knock a movie for “trying too hard.” It’s preferable to movies that don’t try hard enough, but when a movie is working this much to be cool and funny the strain shows. The Babysitter has its moments to be sure, but you’ll probably forget about it by the time Netflix auto-plays whatever is next.

Cole (Judah Lewis) is a dweeby guy who gets picked on by everyone. Cole has kind of accepted his fate, which makes his encounters with bullies a little sadder and makes Cole slightly less sympathetic. No matter, Cole doesn’t need sympathy from me or anyone else. Why would he when he has the most popular girl around in his corner? That would be Bee (Samara Weaving), who looks out for Cole around town and babysits him when his parents go away on the weekends. Cole and Bee have a sibling-style relationship, complete with choreographed dances and their own handshake. Cole and Bee’s latest weekend together is like any other until bedtime. With Cole tucked away in his room, Bee has some friends over and they play a hybrid game of spin the bottle and truth or dare.

Typical babysitter, always taking advantage of a lavish house, am I right?

Of course, Cole isn’t really asleep. He sneaks down in time to watch Bee make out with Allison (Bella Thorne, in her second Netflix dud after You Get Me) and then watch Bee murder one of her other friends. From there the film falls into an episodic run with Cole taking on each of Bee’s friends until it’s inevitably time for the babysitter and the babysat to square off.

There’s a level of self-awareness to the movie that works against it. The film has a slew of winking-at-the-audience moments and pop culture references, almost like it’s trying to impress you with flash so you don’t realize the emptiness underneath. It’s kind of funny when one character comments on the attractiveness of the cast, it’s much less funny when a character, shot in her breast, laments that no one will want to motorboat her.

So what does the movie have working in its favor? The best part of the movie is Max (Robbie Amell), one of Bee’s friends. Despite wanting to kill Cole, Max is constantly impressed by the kid’s resourcefulness. It’s endearing. The next best thing is the ridiculous violence. Bad horror movies always have a chance to salvage something if the kills are creative, and a few of the offings here fit the bill. The violence is cartoonish in a way that you can’t help but laugh at it. There are arterial sprays that would make Quentin Tarantino smile.

But those things aren’t enough to save the movie from drowning in self-indulgence. There’s a running gag with on-screen titles that are baffling. They’re used as easy punchlines, but they aren’t funny, clever, or useful. It’s an unnecessary flourish indicative of the movie’s attitude. The movie wants you to know how cool it is at all times. But coolness can’t be forced. Coolness is easily conveyed, but you have to be cool in order to convey cool. And The Babysitter ain’t that.

This is where I should tell you that the movie is directed by McG, (of Charlie’s Angels and Terminator: Salvation fame). While he is something of a punching bag for cinephiles, I think his work here is fine. He’s working overtime to inject some personality into a generic story. The screenplay, courtesy of Brian Duffield, is the main culprit. Most of the film’s dialogue is DOA, but the blame for that can be split between writer and the actors.

The Babysitter looks like everyone had a great time making it. The cast is game and directing is slick. But that sense of fun only comes through in sporadic bursts. It’s like going trick-or-treating and coming home to find out your bag is mostly full of Tootsie Rolls. As Netlix’s horror originals go, skip this one and go watch Little Evil.