Everything wrong with ‘Teen Wolf’ explained in 4 charts

Teen Wolf has now killed off half its female characters. Is this the modern-day "jumping the shark"?

Once upon a time, “jumping the shark” meant introducing some ridiculous plot line or new gimmick. But for Teen Wolf fans, that was never a problem. Constant shirtlessness from all the male actors? Awesome. A pair of twin werewolves who glue their torsos together to become a giant, Megazord-like wolf monster? No problem. Half the scenes inexplicably taking place in the boys’ locker room of the local high school, even if the characters are girls, and it’s the middle of the night? Nobody cares.

The real issue arose when Teen Wolf appeared to abandon its original message of feminism, LGBT visibility, and racial harmony.

When the show began in 2011, showrunner Jeff Davis said that if he could write a story about werewolves, then he could set it in a world without sexism, racism, or homophobia. And he got off to a good start. The main character is Latino, the leading lady comes from a matriarchal society of werewolf hunters (think Buffy, if vampire slayers were a creepy family cult, led by Saul Tigh from Battlestar Galactica), and there are several secondary gay or bisexual characters who are treated without a hint of homophobia by the main cast.

However (and yes, you could probably tell there was a “however” coming up), this idea didn’t exactly pan out as expected. In the third season, several characters were killed off, and those deaths indicated a disturbing trend.

The first to go were two of the teenage werewolves, Erica and Boyd. The girl and the black guy, to put it bluntly. At first this doesn’t seem like such a big deal, because a show like Teen Wolf is likely to have a pretty high mortality rate. But the demise of Erica and Boyd meant that of the three teen wolves introduced in season 2, the sole survivor was the white guy, Isaac. In fact, looking at the current remaining cast members, the best way to survive a perilous Teen Wolf lifestyle isn’t to have great fighting skills or even to be a popular character—you just have to be white and male.

To illustrate this point, Tumblr user dudski created several graphs to break down the demographics of character death rates in the show. 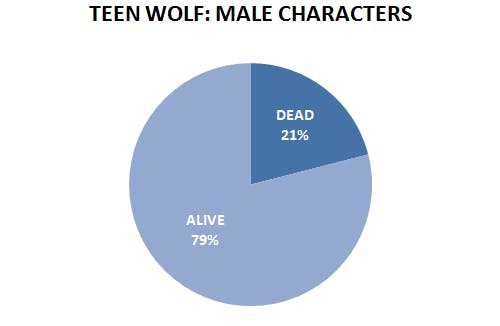 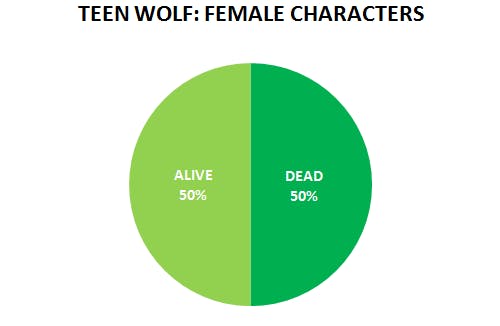 Basically, men have an 79 percent survival rate, whereas half of the women on the show are now dead. Which is kind of impressive when you consider the fact that there were way more guys in the cast to begin with. The situation looks even worse when you consider the circumstances around those deaths: The three female villains (Kali, Jennifer, and Kate) were killed off, while the white male villains (Gerard, Peter, Deucalion, and the Twins), survive and often receive redemption arcs. One of the most baffling character deaths was Boyd, who was killed by the (white, male) twins Ethan and Aiden. After just one episode he was forgotten by the rest of the characters, and the twins went on to survive and be “redeemed” without any mention of the fact that they’d murdered a teenage boy in front of several of his friends. 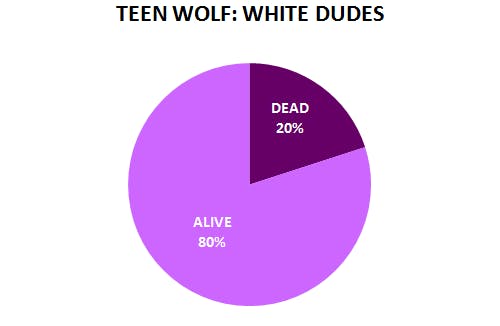 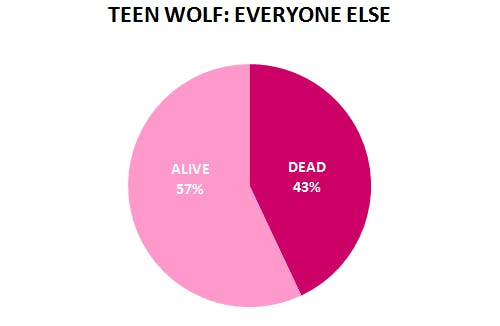 Of the new characters added this season, there is one surviving woman: Cora Hale. But just to add insult to injury, she’s one of the characters who received almost no character development in the 12 episodes so far. One Tumblr user even pointed out that we know less about her than we know about a joke character who never actually appears on screen.

In the world of Tumblr fandom, Teen Wolf was originally seen as a less sexist alternative to shows like Supernatural, where female characters are almost certainly doomed. Either they’d die tragically to give the male leads something to angst about, or they’d turn out to be a sexy evil villain. Supernatural did similarly badly in the racism and homophobia departments, making Teen Wolf seem like a utopia by comparison. So when Teen Wolf’s third season apparently transitioned into a show where white men receive dynamic storylines and everyone else shuts up or dies, fans were not pleased. Particularly once it was announced that the next major storyline on the show would feature a “heavy Asian influence” in the form of a kitsune, or Japanese werefox.

In an email, Teen Wolf fan bacarat set down some of the reasons why she’s dubious about this idea.

As an Asian American, I have grown up seeing my own experiences butchered and misrepresented by the media doing just that to my Asian parents’ stories, or their parents’.

That is why I was immediately wary when Jeff Davis announced the kitsune as a storyline, of which the ramifications are entirely different than what the show has done with Celtic and Norse myths. Even if the average Teen Wolf viewer was previously unaware of those mythologies, their pervasiveness in the Western canon can usually provide some frame of reference. The same cultural and historical context is completely lacking when it comes to interpreting Asian mythologies, often for both creator and audience, which makes it easy to cherry-pick facets convenient for the show or to misrepresent those inconvenient.

That leads to representation by necessity—the need for Asian faces to sell those Asian myths, by capitalizing on their exoticism and categorizing them as distinct from white actors and their narratives—which can be just as bad as no representation.

In the midst of all this criticism, it might seem like some fans (or former fans) are going out of their way to be overly negative this season. But Twitter user lurrel point out to us, much of this criticism ignores the fact that the lead character in the show is Latino.

I see a disturbing pattern where meta discussing the race issues in Teen Wolf gloss over or completely ignore the fact that Scott McCall and his mother are both prominent, well-written characters of color. It really came to a head for me when I saw multiple outraged posts over casting a “white” (read: Anglo) man for Scott’s father, who is played by Latino actor Matthew del Negro.

It seems that Scott’s ethnicity is either ignored in favor of writing screeds about how Teen Wolf has never had a well written character of color, or his ethnicity is not textual enough—despite his existence as a white Latino with non-Spanish last name is the same existence for tons of [email protected] out there who have probably never gotten a heroic protagonist like Scott. I don’t want to say that Scott’s Latino identity gives the show a pass on racist writing and tropes—it absolutely doesn’t. But it does make Teen Wolf more complicated than a show that can’t handle race at all; it simultaneously has a great, fresh Latino protagonist while still indulging in problematic storylines that leave characters like Boyd underwritten, dead, and unmourned.

The good news is that the people behind Teen Wolf are unusually involved with fandom and social media, meaning that they almost certainly know what fans have been complaining about this season. Also, Jeff Davis has already proven that he can take criticism and is very thoughtful when it comes to fandom’s opinions of the show.

When asked if she thought fans would stop watching the show, bacarat told us that most people would probably wait for season 3B before they made their decision. While fandom’s opinions can probably tracked with the rise of the “Jeff Davis is not a gift” tag (a reaction to an early fandom catchphrase, “Jeff Davis is a gift”), people are still hoping for improvement. As bacarat explained, Teen Wolf still has the potential to be great:

I myself will continue watching to see if the show can draw upon its experience and improve, as well as for the development of the kitsune storyline. Teen Wolf is unique in how much world-building it does for the particular demographic it is aimed at; I hope they understand that responsibility applies not only to the show’s magic and myth, but also to its society—and how it seems from the outside, looking in.