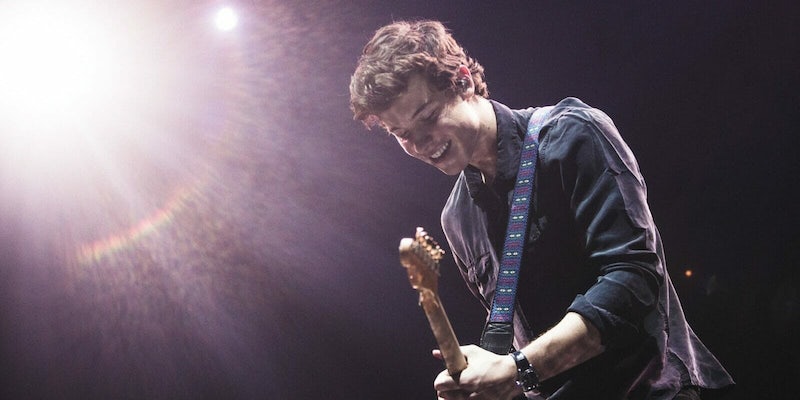 Shawn Mendes’ ‘Nervous’ is our teen bop of the week

He might be boring, but we're still here for it.

It’s summer, baby, and you know what that means. Time to start examining the contenders for summer 2018 pop anthems. Shawn Mendes, the slow-bop king of teens and former lord of Vine is a sure—if subtle—contender. While everyone on the internet this week was busy yelling at Drake and Pusha T or still stanning Kanye West’s latest MAGA-infused wilderness album Ye, the 19-year-old quietly dropped his self-titled third album, featuring precocious crush anthem “Nervous.”

Before you get mad at me for unapologetically loving Mendes, please think back to the summer of 2015 when you secretly blasted his first certified bop “Stitches” alone in your car but probably refused to add it to your Spotify playlists. This time around, his teen heartthrob charm has dissipated to reveal what could be a more discernable identity with safe but soulful tracks like “In My Blood.” Pitchfork praised Mendes’ growth, but also noted that his music “too often falls on the wrong side of beige.”

Maybe Mendes is lacking any kind of memorable distinction. But hear me out: Beige bop is the most universal. He’s 19 and he’s here to wax poetic about relationships that don’t exist… yet. Approximately 34 seconds into “Nervous,” the beat picks up and the relatability factor kicks into high gear. “Talk a little too much around you/get a little self-conscious when I think about you” he sings. There really isn’t a more universally mortifying teen feeling than the sweaty, blithering overanalysis that comes with having a giant crush.

You’ve probably noticed a theme when it comes to catchy pop anthems about crushes that cause both physical and emotional anxiety—Selena Gomez’s “Bad Liar” bears a striking resemblance to “Nervous” both lyrically and in terms of song structure. (A few very fun mashups of the two songs have already made the rounds on YouTube if you don’t hear it right away.)

Look, we’re not here to overanalyze the similarities or judge overall beige-ness. Both songs turn a stomach-churning feeling into a bop you can blast while you subtly bike by your crush’s house or reminisce from your cubicle. Plus, uh, if you listen to the whole album, “Stitches” will probably come on autoplay soon after.

Teen Bop of the Week is a weekly column that recognizes not only the songs that pay homage to teen-dom but songs by top up-and-coming artists who either are teens themselves or deliver certified bops to a teen audience. These are songs that are, by our own definition, BOPS. According to Urban Dictionary, “a bop” refers to “a song that will always be good, legendary.” However, it must be noted that not *all* good or legendary songs are designated bops. There has been much contention on the internet about what qualifies a song as a true, indisputable bop. Is it the hook, beat, or drop? Or the degree to which you can throw a** and scream? Who’s to say! The anatomy of a bop will always be hotly debated, but they deserve to be blasted on repeat every day of the week. Kindly turn up the volume and gird your loins.