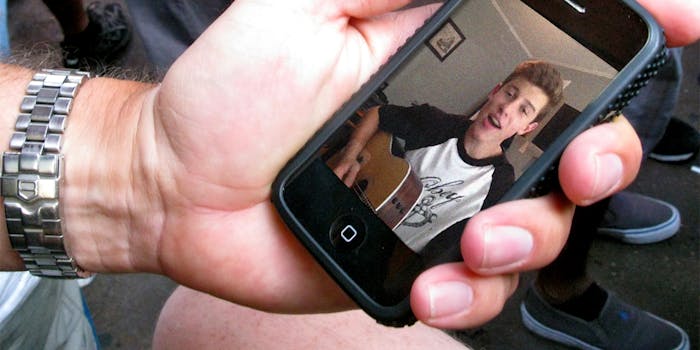 His success on Vine, where he has 2.9 million followers, landed him a record deal with Island Records.

Shawn Mendes might not be on mainstream music’s radar just yet, but he’s certainly a Vine star. And on Sunday, his new album landed the No. 1 spot on iTunes.

The Shawn Mendes EP, released July 28, is the 15-year-old musician’s first album, and his success on Vine, where he has 2.9 million followers, landed him a record deal with Island Records. Mendes is wholesome-looking, and uses his falsetto to heart-fluttering effect. The New York Times’ Jon Caramanica explained why exactly this ascent might have happened:

In music, at least, earnestness is the currency that makes the Internet hum. Think of all those kids staring into cameras and singing their hearts out in hopes of a little attention, buskers with hats in hand. Their purposeful lack of artifice — yes, it’s a pose, but a vulnerable one. True self inside! Just press play!

Vine’s already proven fertile ground for discovering earnest new talent, and labels have started scouting the platform for the next big thing. Mendes’ use of Twitter to launch an album up the charts is also standard practice for social media stars these days, and his devoted fanbase made it so. His album hit No. 1 in 37 minutes, as fans used the hashtag #ShawnToNumber1. As Jezebel points out, Mendes’ fanbase is largely teenage girls, who have proven they have the collective power to drive an album to No. 1 or make something trend.

His debut single, “Life of the Party,” is the kind of song tailored for singalongs and Vine covers, perfect for soundtracking, say, Apple commercials. On Vine, where art exists in six-second blinks, this earnestness is consumed even faster, and often stands in contrast to the braying teenage boy world of Vine. He is, as Caramanica says, “an emotional do-gooder.”

He also knows girls want to hear him cover Queen Bey. The bigger question is, how far will earnestness take him?

Photo by  torbakhopper/Flickr (CC By 2.0) | Screengrab via Shawn Mendes/Vine | Remix by fern