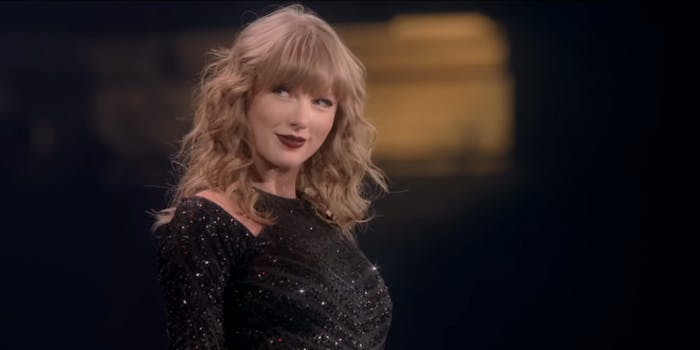 What are you doing New Year's Eve?

The platform has been dumping a lot of news this week, and on Thursday—Swift’s birthday—it announced that a concert film for her record-breaking 2018 tour will debut on Dec. 31. According to the synopsis, the film features “pyro, fireworks, multiple stages and, of course, a 63-foot cobra named Karyn.” Openers Camilla Cabello and Charlie XCX will also be featured.

This acquisition follows something of a new trend for Netflix, and one that could prove successful for music fans looking to experience the stadium concert without shelling out the money: This week Netflix is releasing Springsteen on Broadway, a look at Bruce Springsteen’s intimate (and expensive) New York City show filmed earlier this year. Netflix also announced a documentary on the ill-fated Fyre Fest this week, though that one appears to be focusing on the disaster and mayhem of the 2017 island music festival that never happened.

Thanks so much for all the birthday wishes! Today I finally get to show you something we’ve been working on for a while… the trailer for the Reputation Stadium Tour! The entire concert film will premiere on @Netflix at 12:01AM PT December 31. pic.twitter.com/ZL3Kx2OUx8

No word on whether the Swift film will feature the facial recognition technology that she reportedly used at her concerts to identify stalkers.