You will not ruin Taylor Swift's vacation and get away with it.

Life as pop megastar and NYC public school benefactress Taylor Swift is hard. Swift can not simply take a vacation with her best friends, the sisters from the band Haim, without being hounded by sneaky paparazzi photographers.

Last month, she posted this shot from a recent trip to Maui:

Apparently, the posts were a defensive tactic against some vicious paparazzi who were taking her picture with jumbo camera lenses. Swift told BBC radio:

“My security gets out the binoculars and sees that they have a huge long lens camera,” the pop singer told BBC Radio. “At which point, we go back to the beach and realize, ‘OK, so they got pictures of us in our bikinis.’”

“We found out later they had been everywhere we were,” she said. “I’ve never seen such stealth-mode paparazzi, like, three miles away, long-lensing it up.”

She explained her midriff philosophy to Lucky last November:

“I don’t like showing my belly button. When you start showing your belly button then you’re really committing to the midriff thing. I only partially commit to the midriff thing—you’re only seeing lower rib cage. I don’t want people to know if I have one or not. I want that to be a mystery. As far as anyone knows based on my public appearances, they haven’t seen evidence of a belly button. It could be pierced. They have no idea. If I’m going to get some sort of massive tattoo, it’s going to be right next to my belly button because no one’s ever going to see that.”

But apparently scooping a photographer out of hundreds of thousands of dollars is worth a little personal sacrifice.

Like all good things, the art of scooping ‘paps through Instagram was initially perfected by the Kardashians and Rihanna. The best example of this is probably Kim’s wedding photo—which of course became the most liked Instagram post of all time.

Taylor’s next goal should be to master the art of the paparazzi-shaming snap. Kim’s already got the game on lock: 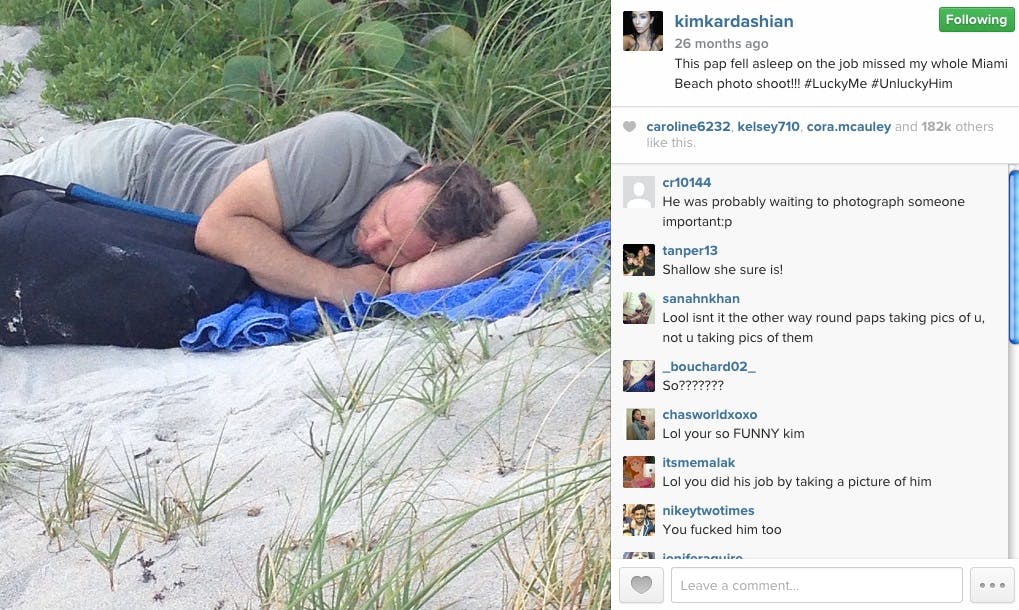