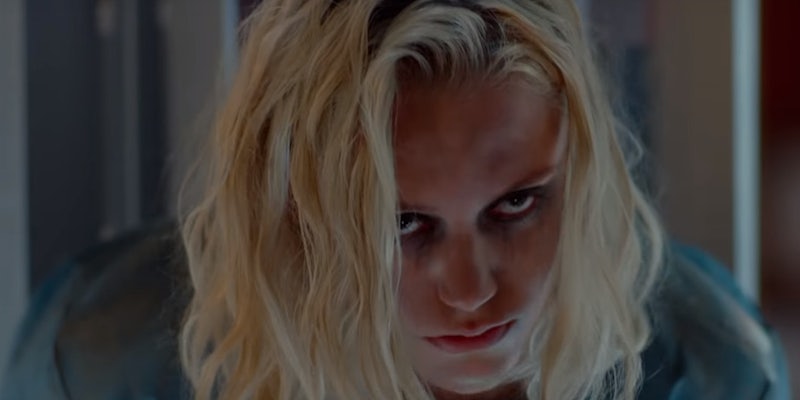 There’s only one way to attack a worn trope, and that’s to bring it. Federico D’Alessandro, a veteran storyboard artist for Marvel, doesn’t in his debut feature.

The bumbling, technology-gone-awry Netflix thriller TAU accompanies the street-smart Julia (Maika Monroe) who ends up captive in the experiment of a demented (supposed) genius named Alex (Ed Skrein). Her frenemy, Tau, is an advanced A.I. developed by Alex, who protects the futuristic house with creepy drones.

Julia, of course, finds out she’s probably going to die as soon as Alex’s grand experiment is over. Finding a connection with Tau (voiced by Gary Oldman), she realizes that Tau yearns for more knowledge and could be of great assistance. However, for any mistakes she makes, Alex’s evil-looking defense robot will punish to whatever extent that its builder chooses. For any errors Tau makes, Alex will erase the knowledge it craves.

Tau’s humanistic desires and wobbly ethics make up a substantial portion of the film’s issues. Tau’s loosening obedience to Alex and growing alliance with Julia has no discernable rhyme or reason. Additionally, the idea that it had not already accessed the knowledge that Julia feeds it is puzzling and left unanswered. Perhaps Tau exists in a closed system contained to strictly the inside of the house, but the film pokes holes in this explanation. And with the wide availability of cheap camera systems, there’s no surveillance whatsoever in the smart house that alerts Alex to literally anything while he’s away. Even more peculiar is the incredulous latitude Julia is continually conceded to bargain with both Alex and Tau. However, the film’s ultimate sin lies in its shifting center.

The use of the term “tau” likely derives from ancient symbol for resurrection and the Franciscan group within the Catholic Church, as a long-used representation of the Christian redemption. In the film, D’Alessandro uses Alex as the Old Testament God, mostly all-powerful and vengeful. For repenting Tau, Julia represents a messianic figure, from which it regains its redemption.

By the end of TAU, if you’ve made it beyond the hand-wrung bargaining, the humans are inconsequential, and ultimately serve as systemic throughputs. For D’Alessandro, intentionally or not, it is the machine that receives deliverance. It proves an unsettling final message that arrives via old-hat science fiction tropes.