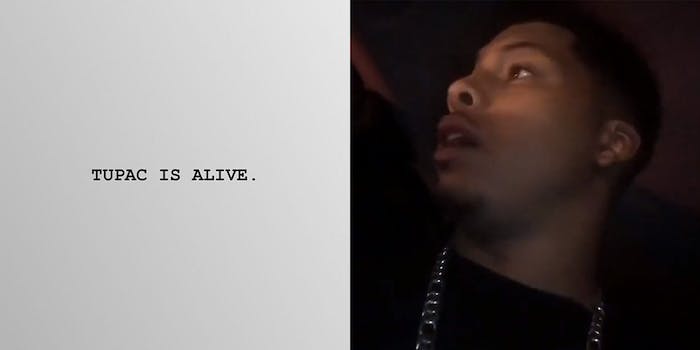 Knight claims the rapper is living in Malaysia, but theories on his whereabouts have circulated for years.

Last week it was announced that at least two new Tupac Shakur albums would be released soon, after his estate settled a lawsuit with Death Row Records over royalties. Suge Knight, Death Row’s former CEO, is set to be sentenced today for a 2015 hit-and-run that killed 55-year-old Terry Carter, but Knight’s son had some other news this week.

Yes, Suge J. Knight is the latest person to claim Shakur—who died in September 1996 after being shot in a drive-by, while in a car with Suge Knight—is still alive. He posted a photo to Instagram that simply stated “Tupac is alive,” followed by a few photos that have already circulated online of Shakur allegedly with 50 Cent and Beyoncé, as well as an alleged video of the rapper in Malaysia, where Knight claims he lives now. Knight also claimed he was being followed because of this knowledge.

Thursday morning, Knight continues to assert that Pac’s alive via his Instagram Story, claiming that the Illuminati is closing in on him for revealing the truth.

Last year, during the production of the special Who Shot Tupac and Biggie?, host Ice-T asked the elder Knight about the possibility that Shakur is still alive, and Knight claimed that “with ‘Pac, you never know.” Of course, there are also theories that Knight was involved in his death.

No date has been set for the new albums yet.