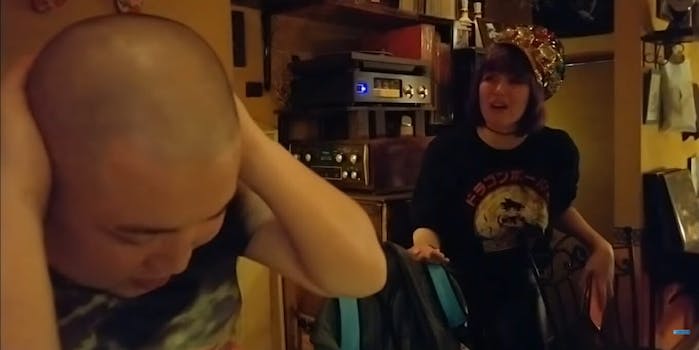 Hayubsama somehow thinks it's cool to film his girlfriend's reaction to his cheating.

During a live stream that was genuinely painful to watch, woefully tone-deaf, and has thus gone viral, IRL streamer Hyubsama admitted to his girlfriend that he’d cheated with an ex—and then filmed her reaction.

The Twitch stream appeared to have no other purpose other than Hyubsama’s admittance while trying to embarrass his girlfriend, and get views, in the process. Starblitzy, who is also a streamer, seemed to be taken completely off-guard by the news. When he admitted “I kissed her,” even Starblitzy seemed confused, asking “kissed her?”

“I kissed Tina,” Hyubsama said. “Four days ago. I’m sorry.” Starblitzy was visibly upset and quickly tried to remove herself from the situation. That should have been the end of it.

But Hyubsama repeatedly stopped her, making excuses and even trying to pin some of the blame on her. A series of harsh and unhelpful messages and donations from viewers continued popping up on the computer as the video continued. One, which read “He cheated because you are very ugly waman,” appeared where Starblitzy could read it as she stood near the door, devastation clear on her face.

Hyubsama took a break from his normally benign streams to post the awkward and abusive interaction. People were quick to question the video’s authenticity, as it would be far from the first time a streamer has fabricated drama for views. Starblitzy herself asked Hyubsama why he chose to live stream his confession in the video. His repeated claims of “I don’t need the money” provided no explanation for why he would choose to admit his indiscretions in front of an audience.

When a clearly distraught Starblitzy finally managed to flee the camera, Hyubsama followed her outside—still streaming. Somehow, he was baffled when she told him she wanted him to come down without the stream. A little privacy in a relationship can be a good thing, it turns out.

In a stream from Hyubsama early on March 7, he told viewers that he and Starblitzy were not broken up—yet. A March 6 tweet from Starblitzy, however, seemed less optimistic. “This was never more true than ever after tonight…relationship should not be content,” she wrote.

A series of follow-up streams from Hyubsama appeared to expose his complete lack of remorse. He whined about girlfriends, chuckled at jokes, and overall didn’t seem at all upset at the potential end of his relationship. Here’s hoping Starblitzy does better without an abusive boyfriend who doesn’t turn his issues into views.