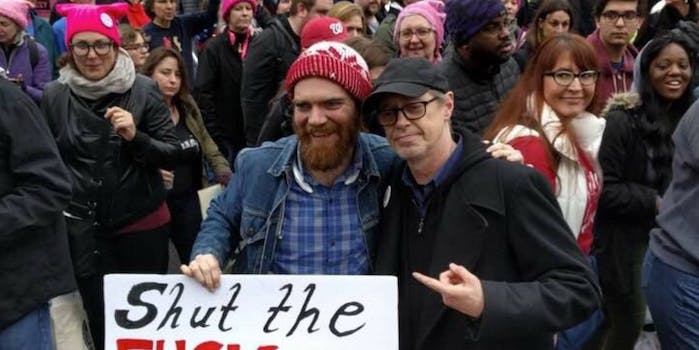 There were countless creative and hilarious signs at the Women’s March on Washington Saturday, but only one got the personal approval of Steve Buscemi.

The acclaimed actor was not one of the scheduled speakers at the event but instead appeared on the streets alongside the estimated 600,000 protestors in attendance. Buscemi posed with a man holding a sign that read, “Shut the fuck up Donny you’re out of your element,” a reference to a classic line in The Big Lebowski directed at his character, Donny.

Steve Buscemi poses with a man who turned his dismissal from The Big Lebowski into an effective #WomensMarch protest sign. pic.twitter.com/G1ysa2fsVv

In case you’re somehow unfamiliar with the scene or haven’t binged The Big Lebowski during late-night TV in the last five years, collapsed on the couch and picking crumbs out of your T-shirt, here is a supercut of John Goodman delivering the line in the movie.

It’s a good excuse to revisit this mashup from Salon from last year.