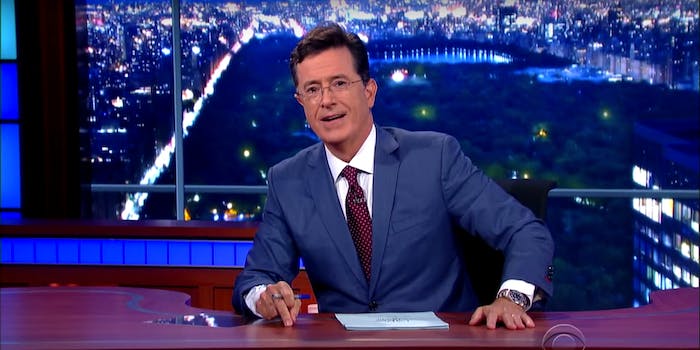 Nine months after ending The Colbert Report, Stephen Colbert finally introduced the nation to the “real” Stephen Colbert in an episode of The Late Show full of weirdness, complete geekery, and the political junkie we’ve missed so dearly.

Aside from Trevor Noah, who takes over The Daily Show at the end of September after Jon Stewart’s departure last month, Colbert probably had the biggest shoes to fill in the late-night host shuffle. Jimmy Fallon, who only started his reign on The Tonight Show last year, just had to push exactly what he was doing on Late Night up an hour (and onto a new stage). James Corden has been making The Late Late Show his own since he started in March, but he probably had no pressure to follow in Craig Ferguson’s footsteps—and could’ve been encouraged not to, for all we know. Larry Wilmore took over Colbert’s time slot, but he brought over a show of his own.

Colbert, however, was taking over for David Letterman, the first and only host of The Late Show. The show was created for him after he lost The Tonight Show to Jay Leno more than 20 years ago. That legacy, paired with the perfection we likely expected out of Colbert and his writing staff, ultimately guaranteed some people would be disappointed.

But will people tune out because of it? It’s got to be a much better option than more reruns of The Mentalist, both for the audience and Leslie Moonves at CBS—although the latter did threaten to switch over to the reruns if Colbert didn’t work out.

Prior to his debut Tuesday night, Colbert and his crew ran two weeks of complete test shows for audience members who grabbed a ticket (including this reporter). The process is a little different than it was at his old stomping grounds at Comedy Central: You check in at the Ed Sullivan Theater, where you’ll get a hand stamp and a ticket noting your place in line. 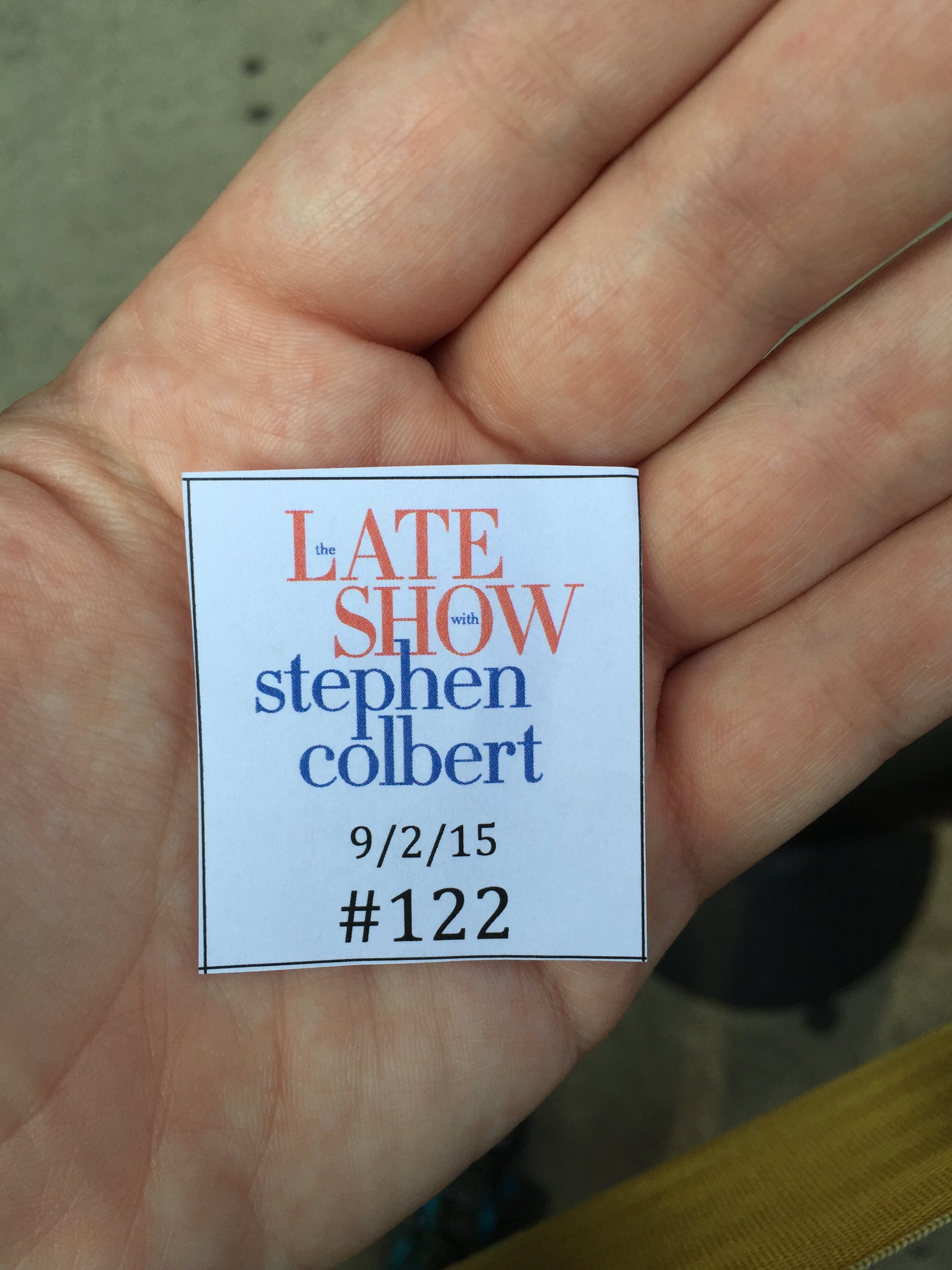 After getting your picture taken in the lobby—we were told that Colbert wanted photos of every audience member who sees him—you can leave and come back later, when you’ll wait for just a bit before you’re seated and the show begins. The night I went, it took nearly two hours for everything, including warm-up comedian Paul Mecurio, Colbert’s Q&A, the show’s run-through, and wait time in between segments. The staff asked that we not post any pictures or spoilers about what we saw (which some people risked).

Colbert’s first episode was rocky at certain points and brilliant at others, but there’s plenty of potential for him to grow into something great and iron out some of the kinks. After 10 years of perfecting a character, he’s starting out new again—and well, it’s not going to be completely polished right away.

He began the episode on a patriotic note, with scenes of him traveling to different parts of the country to sing the National Anthem in a nod to his old character’s massive patriotism. Stay for the end; the cameo from Stewart (who’s an executive producer of The Late Show) at the end is worth it alone.

“We have been working so very hard to get the show ready for you,” Colbert said. “As long as I have nine months to make one hour of TV, I can do this forever.”

While some hosts are getting rid of the monologue, Colbert stepped right into it before his stunning opening credits featuring a toy-like model of New York City (which he announces live, and which needs to go online ASAP) started to roll. Although it ran that way during the test show, it’s unclear if Colbert will continue to keep the format of coming on stage before the credits.

Then he introduced the audience to the newly renovated Ed Sullivan Theater, which is even more impressive in person. I sat on the lower level, about five or six rows from the front and right in front of Colbert’s desk (which is on the left side of the stage). Jon Batiste and Stay Human, Colbert’s band, were on the right side of the stage, which keeps the red, white, and blue theme of The Colbert Report. To the left of Colbert were his many books and some trinkets the Colbert Nation would be sure to recognize: his Captain America shield, the pennant his mother had from Dr. Martin Luther King Jr.’s March on Washington (an event Colbert attended in utero). The balcony obscured my view a bit, but I swear I could also see Aragorn’s sword from The Lord of the Rings.

Fallon even made an appearance wishing him luck, throwing away the notion that there was yet another late-night war brewing among the new batch of hosts. They even joked they’d see each other in the locker room, a bit that would pay off later.

But one of the weirdest moments of the night came right afterward. Colbert apparently pledged his soul to an ancient cursed amulet that made him continually endorse Sabra hummus.

.@colbertlateshow Well done Stephen! Your shameless plug of our hummus is pleasing unto his Reptilian Majesty. #LSSC pic.twitter.com/ngbljSztRG

The endorsements continued as Colbert paid his daily dues to to Donald Trump, a man who late-night talk show hosts are obligated to talk about, as he joked in the test show. He went hard for Trump’s comments about never eating Oreos again and even compared the cookie to covering Trump himself: He tries to treat himself to one or two but ends up eating the whole container in one sitting.

Something tells us he’ll be eating Trump-esque Oreos by the bucketful by the end of the 2016 election season.

His interview with George Clooney, who wasn’t there to promote anything, showed some of his faults. It was awkward (although it could’ve very well been scripted that way), a softball interview, and resulted in Colbert’s only foray into true celebrity sketch territory: Clooney eventually started promoting a fake movie he shot on The Late Show.

But when former Florida Gov. Jeb Bush came onto the stage, that’s when it got interesting—and showcased Colbert’s greatest strength. Here, Colbert was no longer playing the ignorant, right-wing political pundit. Even as himself, he could throw politicians for a loop. He might be an entertainer now, but don’t expect him to go easy on the presidential candidates vying for everyone’s attention.

“I used to play a narcissistic, conservative pundit,” he told Bush. “Now I’m just a narcissist.”

And considering there was already a stir after Bush attempted to make money off his appearance, Colbert wasn’t going to go easy on him; he wouldn’t let Bush joke his way out of a question regarding the policies of his brother, former President George W. Bush.

But perhaps one of the best parts of The Late Show is one the audience at home only got a glimpse of: Jon Batiste and Stay Human.

You guys might be ready for @StephenAtHome & @colbertlateshow tonight, but you are NOT ready for @JonBatiste & Stay Human.

Batiste, the 28-year-old musician who once dared Colbert to improv his way through his own interview, is a force of his own. His take on music, social music (which happens to be the name of his album), is designed to be shared as well as encompass the very nature of his performance. He and his band (most often accompanied by alto saxophonist Eddie Barbash and drummer Joe Saylor, who’s often on the tambourine) explore the very edges of Colbert’s stage during breaks; Batiste plays the melodica (a wind instrument that looks like a miniature piano) while he dances and sings, often bringing the band with him into the audience.

It’s downright infectious. Colbert and Batiste’s chemistry is already strong, and I’ve got a feeling we’ll see the two perform together almost as much as banter from their respective places. (Colbert himself promised there would be singing in his show, something he’s already fulfilled.)

The show ended on a high note, with Batiste and Stay Human accompanied by Mavis Staples—keeping a promise she made back in May to Colbert about appearing on his show once it launched.

While there were some rough spots in this first appearance, the show can only get better with time, and with enough practice and the right slate of guests, Colbert could potentially prove unstoppable.

At that test show on Sept. 2, Colbert introduced himself to the audience with a tradition he had at The Colbert Report and Wilmore’s taken on (along with, presumably, the other late-night hosts): He opens the floor to questions to the audience. The first one pointed out something the audience at home will likely notice in the coming days: Why doesn’t Colbert’s Late Show sign have Colbert’s name on it?

“I’m right here,” he told the audience as he stood under the sign. He didn’t need to have himself there twice.

Correction 12:01pm, Sept. 9: An earlier version of this story misquoted Colbert: He worked nine months on this show, not nine hours.