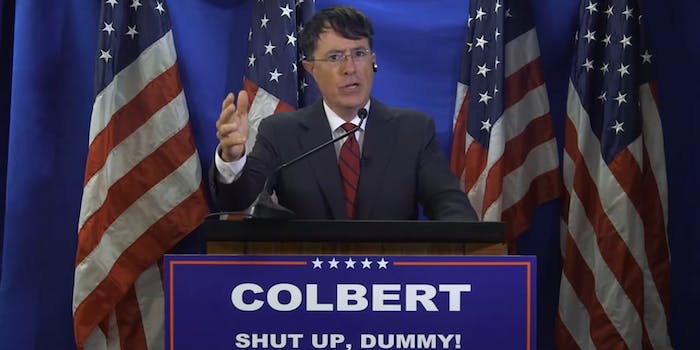 He’s literally foaming at the mouth.

Donald Trump’s presidential campaign announcement is the comedic gift that keeps on giving.

Jon Stewart will have an endless amount of material for weeks to come, and now we’re hearing from Stephen Colbert, who doesn’t even officially start hosting The Late Show until September. Such is the power of Trump that Colbert couldn’t even wait that long to get in on the fun. He had to make an announcement of his own.

Copying the Trump hairdo and voice, Colbert is rolled to his podium in “a giant human trash can” to let us all know that he’s still going to host The Late Show and that he knows Trump will be great for the election—and for late-night fodder.

“That’s how it’s got to be, OK?” he said. “Because Donald Trump is running for president and he’s going to make late-night television great again.”

It’s six minutes of a brilliant, jumbled mess, and it makes us even more excited for Colbert’s official Late Show debut.